Soccernomics: Comparing the Euro Leagues and Financial Market Slowdowns During the World Cup 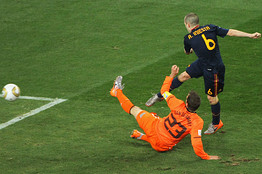 First, a set of charts from the The Telegraph of London compares the top European football leagues (aka the top leagues in the world).  English football is often characterized as more physical and less technical than other leagues, particularly Spain, which is generally considered the most technical in the world. Interestingly the statistics do not bear this out.  The English Premiership has the best passing accuracy and the most goals among the top leagues and the fewest tackles: 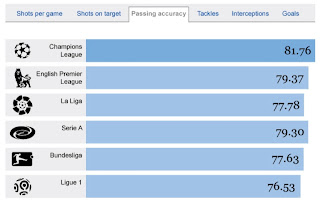 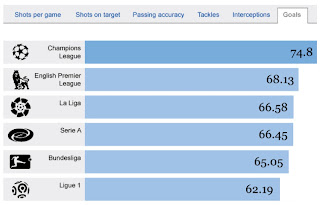 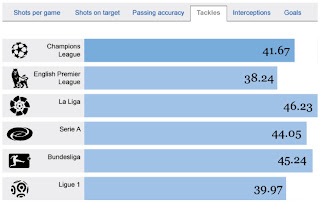 Which is not to say that the Prem is superior, just that old notions of route one booting the ball and crunching tackles in England are outdated.

Second, and interesting paper about the slowdown of stock market trades during World Cup matches.  It turns out they fall dramatically when the national team is playing, especially in Argentina.  But the US slows considerably too:

During the 2010 World Cup in South Africa, equity trades plunged an average of 45% at stock markets when the national team was playing, according to a new paper by a pair of ECB economists.

A goal reduced trading another 5%. Trading already tapered off even before the match starts, and stayed slow during halftime.

“Overall, there is a strong sense that stock markets were following developments on the soccer pitch rather than in the trading pit,” ECB economist Michael Ehrmann and David-Jan Jansen of the Dutch central bank wrote.

Argentina had the most die-hards. Trades per minute fell 72% when Argentina was playing, second only to Chile in the 15 countries examined. Trading was still down 40% even when Argentina wasn’t playing, tops on the list by far. Trading in Germany was down almost 60% when Die Mannschaft (The Team) played.

What about the U.S., where soccer isn’t as popular as it is in Europe and Latin America? “We also find strong indications of declining activity in U.S. stock markets,” the authors wrote. Trades per minute were down over 40% when the U.S. played, and around 25% during other matches.

Email ThisBlogThis!Share to TwitterShare to FacebookShare to Pinterest
Labels: Soccernomics

Trading activity definitely slowed on our commodities desk during the U.S. match in 2010. When Donovan scored his big goal, the entire floor was standing and cheering.