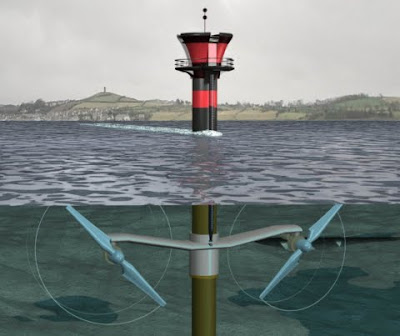 From The New York Times:

The SeaGen is akin to a submerged windmill that is driven by flowing water, and the Bristol-based company already has a small-scale operation established in Strangford Lough, Northern Ireland, where it has been generating 1.2 megawatts of electricity since April 2008.

Considering SeaGen’s development costs, its makers reckon the device generates electricity at about $5.5 million per megawatt installed — or roughly double the cost of offshore wind energy.

They consider that a victory.

“How many millions of kilowatts of wind are installed already, and here I’ve got one machine and I’m one small firm and I’m only twice the price?” said Martin Wright, the company’s managing director. “We haven’t even started going down the cost-reduction curve yet.”


Energy derived from ocean tides and waves has been eagerly pursued for years by dozens of companies, mostly in Europe and the United States, but it has been stymied by technological setbacks and limited funding. No large scale commercial operation yet exists.

Benj Sykes, who helps develop renewable energy technology at the Carbon Trust, a group funded by the British government, said he sees “significant potential” for wave and tidal energy. But he added that the technology is expensive to develop because testing must be done in the ocean rather than on land, unlike with wind turbines.

This is interesting as it has the potential, it seems to me, of being a more reliable form of energy generation than wind or wave.
at 1:30 PM

It is essentially dams with out the dams. It requires that water flows through the device... which may in fact be practical... on the other hand, that energy is taken out of the water stream, which had sediment transport and potentially other ramifications for a river. As well, fouling and mixed usage are a concern.

I'd say it has interesting potential, but one of the advantages of wave energy is the substantial massive amount of energy potential density, wherein the same may be found less true of instream windmills when given other concerns.