Everything Old is New Again

Note: Just about every post these days begins with an apology for it has proven to be extremely difficult to keep up with the blog while in Brazil trying to accomplish all of the tasks big (completing the research project that brought me here) and small (comprehending the intricacies of the Portuguese language, understanding the Brazilian school system for my kids and navigating the byzantine Brazilian bureaucracy).  But my time here is quickly drawing to an end and as of September 15th I will be back full time at OSU.  It is my hope to resuscitate the blog upon my return but that may prove difficult as well as I will be taking on the duties of 'coordinator of the economics program' which is moderno speak for 'chair of the economics department' except that they don't trust me to make final decisions about the budget. [This was all a part of the grand reorganization of OSU that was supposed to make it lean and mean and lower administrative costs, but for me at least it has just added an entirely new layer of bureaucracy and the associated costs therein - but I am sure that statement is evidence of my lack of understanding of the 'efficiencies leveraged']  Plus I am writing a textbook which is no small task as well.  Anyway, the point is that I am doing my best but this blog has always been a hobby and I started it and maintain it under the strict self-imposed constraint that it not interfere with my real job(s).  So my apologies and I hope it will get better soon, but I can make no promises.

During the last decade or so of Chinese triumphalism I was often asked, as a development economist, what I thought of China and whether it was poised to become the dominant economy in the world.  I would always sound a note of caution: deficiencies in social services and infrastructure as well as poor environmental safeguards were tremendous challenges to China that I was unconvinced they were well prepared to tackle.  Recently India, Brazil and Russia were also added to this sense of a new economic world order taking shape.  Again I was cautious.

Being in Brazil only served to deepen my sense of caution about declaring these newly emerging countries triumphant.  The protests in Brazil during the Confederations Cup perfectly demonstrated my point.  As Brazil has grown extremely fast and succeeded in many areas such as decreasing poverty, increasing primary education and the like, it still faces tremendous challenges as the protest showed.  Complaints about corruption, lack of adequate health care, education and public transport reflect the challenges that rapidly growing economies face. São Paulo itself is a perfect example (as is, I am sure, Beijing): a city that has exploded in growth, much faster than planning and infrastructure could keep up with which, as a result, has left is a bit of a mess.  It is a city of enormous wealth, enormous inequality and enormous problems that will not be easy to fix - they will take a very long time and a lot of money.

Anyway, this is all a lead in to an interesting New York Times article about this and how the 'old' economies of the US, Japan and Europe are starting to pick up steam just when the growth of the BRICs is slowing considerably.  Here is the interesting graph that accompanied the article. 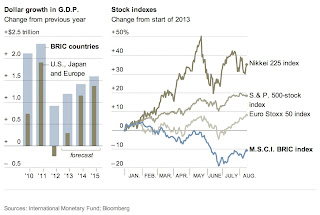 This is not to say that the era of strong BRIC growth is over, just that there is a maturation process that is probably about a 50 year horizon that these countries have to go through in order to create economies that are mature, self-sustaining and work for the entire population, not just the lucky few.

The other theme that I have talked about when asked about China and the relative position of the US, echoed by the NYT, is that China is going to have to shift to a more consumer-driven economy rather than a government-driven one and that the US is poised to become a prime beneficiary of this shift.

Sitting here in Brazil it is pretty easy to become a bit pessimistic.  Years of commodity-driven growth have allowed some social spending, which has been good for the Worker's Party in its quest to hold on to power, but they have done far too little to tackle government graft and corruption, and invest in transportation, healthcare and education.  Without healthy, educated people and a transportation and information infrastructure to support them, where is future growth going to come from?

My favorite image that, to me, is evocative of all of Brazil's promise and challenge is around Avenida Paulista in São Paulo - Brazil's version of wall street.  Among all of the high rises and wealth and situated next to Jardim Paulista one of the fanciest neighborhoods in São Paulo, overhead power and telephony wires struggle to stay aloft under the massive weight of the sheer number of wires.  You see, the area grew so fast and with so little planning, regulation and public investment that the power lines for buildings 20 stories high are not buried in tunnels below the street but are carried aloft on old poles never meant to hold so many lines.  And despite the sheer wealth that Avenida Paulista represents something as fundamental as a reliable power source is left unattended.  [In response, most modern buildings have their own generators to provide power when the outside source is interrupted - once again showing the privatization of what should be a public good.]
at 9:14 AM No comments:

Yes, I am well aware that this blog has become moribund to the point of extinction.  But it is not quite dead just "pining for the fjords" to borrow a phrase, it has not ceased to be.  My sabbatical in Brasil has caused severe disruption in the content of the blog but I hope that normal programming can resume once the fall term begins.

But here in Brasil I do keep track of the goings on on the The Oregonian blog (as this appears to be what the O is quickly becoming, the hallmarks of the blog species are all there: typos, fluff and opinion mixed in with a bit of news) and this caught my eye, apparently someone has been going around posting flyers declaiming the fact that those that benefit from government handouts are also allowed to vote: 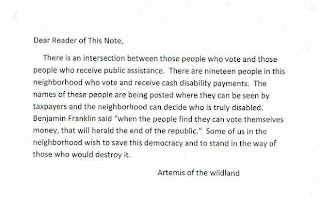 I wonder what dear Artemis believes a government by, for and of the people is all about?  We all benefit from the work of the government - that is the entire point of the exercise.  Pointing out one small population is absurd.  Ranchers get federal grazing rights, farmers get subsidies, the timber industry gets to cut on federal land and then counties receive payments when these timber revenues dry up.   All of these folks vote.  The poor get assistance in the form of tax subsidies, food stamps and healthcare, and they vote.  But it is not just these particular groups, we all benefit from government provided roads, parks, fire and police protection and so on.  And we all vote.  Many of our kids go to pubic schools and still we vote.  We are all beneficiaries of government spending and we all have a say in that spending.

The whole point of a democracy is for us all to figure out together the proper limits of government.  But the point of government itself it that it makes out lives better, it takes care of public goods, it controls and regulates activities that have externalities and it promotes the advancement of the citizenry and the economy through investments in human capital, research and infrastructure.  If it didn't we would not have it.

It has been known since the beginning that voters in a democracy will have a say in the benefits that accrue to them, that is the very point of democracy.  And to complain about a subgroup is simply absurd - it is precisely because such groups are relatively small that they cannot decide for themselves the amount of benefits they receive.  Their votes (nineteen in one neighborhood!) are too few to matter, it is the votes of the rest of us that will determine their fate.

Now I realize that arguing with a flyer-posting crank is a bit silly, I do think it is important to understand the point of government.
at 6:57 AM 2 comments:

Yet another month with good-but-not-great job growth figures.  How long has this been now, five years?  Today we find out that the US economy added 162,000 jobs and that unemployment fell to 7.4%.

I think it is pretty clear that folks that were pointing to a Japan-style malaise had it just about nailed.  Japan's lost decade is looking a lot like what the US is in now.  I think those that argued for a more forceful monetary and fiscal response has the weight of the evidence on their side though I for one remain unconvinced that we have the ability to pull off more fiscal and monetary stimulus.  Needless to say the timing of the sequester and the Fed's potential tapering look unfortunate.