CityLab, the Atlantic's blog about urban issues, has a nice set of visualizations about income along fixed-route transit lines inspired by The New Yorker's New York City Subway Project.   Portland is one of the cities featured and here is a look at the line that represents perhaps the most income inequality - mostly because of the Washington Park stop that 'serves' the West Hills (ave. income $146,779) shortly after serving the Old Town neighborhood (ave. income $18,540). 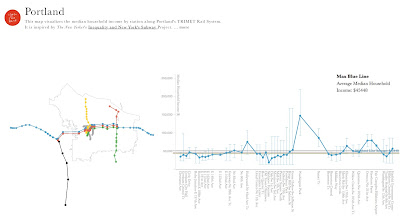 Go there and click on the others for comparison as well as comparing across Atlanta, Chicago and Washington, DC.

Wonder how the installation of fixed-route transit affects gentrification of the neighborhoods served?  Well here is another CityLab article looking at a study that argues that gentrification is a small causal effect.
at 10:00 AM No comments:

Fred Thompson: Must Frankenfoods be Labeled?

Fred Thompson with another contribution: 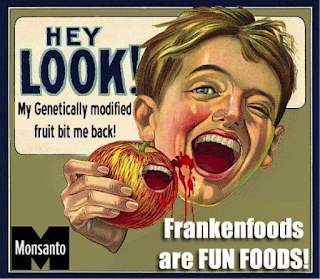 I get a lot of posts on Facebook about GMOs (genetically modified organisms). Most call for mandatory labeling of genetically modified foodstuffs. I have been reticent to speak out against it in this forum because, strictly speaking, my objections aren’t based on economic analysis. Indeed, the strictly economic arguments made against mandatory labeling by its opponents look to me to be weak, at best, and, at worst, paternalistic nonsense.

Rather, this looks to me like a free speech issue, which, perhaps, first of all comprehends the right to be silent. Now, I am a reasonable guy. I am willing to restrict first amendment rights to protect the public health and safety. But that willingness is grudging. You must show (provide plausible scientific evidence) that the restriction really would promote public health and safety, which opponents of GMOs cannot do. This is the Constitutional law doctrine of strict scrutiny, which the standard test the courts invoke when the rights enumerated in the first eight amendments to the Constitution are infringed. 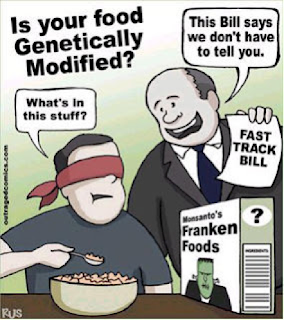 OK, you say, but you have a right to be informed about what you buy. The Uniform Commercial Code grants you that right, which ought to override mere commercial speech protections. Not a bad argument, say I. But, then, the question arises, is there a less intrusive (in the sense of encroaching on speech rights) way to satisfy your need to know? And, in this case there is. Sellers of GMO-free foodstuffs can satisfy your need for information by voluntarily labeling their products GMO-free. 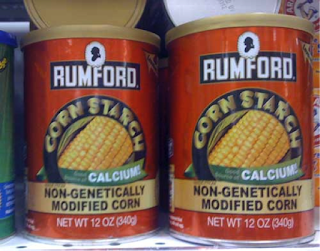 Of course, I have some sympathy for the organic farmer who notes that they were there first – that their ilk have been producing GMO-free foods for thousands of years. It’s not their fault that the need for labeling has arisen. Presumably, however, it’s their customers who want this information, not the GMO indifferent, let alone the GMO lovers. Besides, as those who advocate mandatory labeling in this instance, almost certainly, correctly argue, the costs of labeling are trivial. I have heard some advocates of mandatory labeling claim that it is very hard (costly?) to prove a negative, but those who would want an exemption from the labeling requirement under mandatory labeling would probably still bear the cost burden (not the GMO users/producers). The only difference is that, under mandatory labeling, if the labeling regulations were effectively enforced, it’s likely that the GMO-free farmers (and their customers) would also bear the cost of the governmental regulatory apparatus. 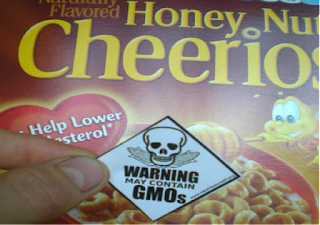 Exactly one year ago, my older son was diagnosed with Type 1 Diabetes (T1D).  As with all such diseases, this one came completely out of nowhere.  It started typically, excessive thirst and frequent urination, and ended up with a four-day stay in the hospital.  He was healthy before and remains healthy to this day, in fact we caught it early enough that he was never sick with ketoacidosis, the potentially fatal complication from excessive sugar in the bloodstream.  We were lucky in that respect.

The reality of a life with T1D is difficult, it means a lifetime of careful management of blood sugars, of always thinking carefully about what you are eating and how to dose the appropriate amount of insulin, of carefully managing the carbohydrate demands of exercising muscle tissues when he plays soccer. But the emotional toll is far worse. A parent never, ever wants to hear that their child has a potentially fatal autoimmune disease and, as an adult you mind immediately wanders to the next 10, 20, 50 years of your child’s life and you feel overwhelmed and panicked.  I spent a week in tears, trying to me strong in front of my son, but feeling crushing panic, sadness and despair inside.  I would take bathroom breaks to go and cry.

Amazingly the center of strength in the family was my son himself.  Well, I imagine it is not amazing to anyone who has dealt with a similar issue – they know firsthand how amazingly resilient are kids.  He cried exactly once – when he was told the diagnosis – and has never felt sorry for himself save for a couple of moments here and there when the burden of having to deal with diabetes when his friends do not becomes too big a drag.  But from day one he took charge of his own care, began administering his own injections, calculating his carbs and testing his blood sugar.  He has risen to the challenge and his determination not to let it derail him has been an inspiration to us all.

In the past year I have never stopped marveling at how well he has dealt with such a life-changing event.  Modern medicine and technology has helped.  He now has a sophisticated insulin pump that attaches directly to his body and allows him to be active and avoid needles, injections and having to carry around too much equipment.  He can even swim with it, which is good because he likes to swim more than anything.  We have, as a family, adjusted to the new reality and are now used to counting carbs, making sure he has his bag with supplies and emergency glucagon and helping with pump changes that occur every three days.

As an economist I marvel at how difficult this diagnosis must be for families without excellent insurance, stable jobs and local medical expertise.  We are incredibly fortunate to have the time, the resources and the help near at hand.  Something like this makes one appreciate the need for universal access to health insurance.  This is a disease that is unpreventable.  A bad RNG as my son calls it, referring to the random number generator code that determines the bonus prizes he gets in his favorite video game.  [This has led to the discussion of how it is not possible to program true randomness, and whether there is any such thing in the world anyway – but I digress]

I have learned to be patient with those who don’t know the difference between Type 1 and Type 2 Diabetes, as I was completely ignorant of it prior to my son’s diagnosis as well.  For the record, they are entirely different diseases common only in the fact that they both involve your body’s ability to deal with sugar.  T1D is an auto-immune disease where, for reasons still unknown, your body’s immune system decides to attack the cells in your pancreas that produce insulin – eventually destroying them all. Insulin is the hormone that allows your body to process the sugars in the bloodstream and move them to the cells where they are converted into energy.  The key with T1D is that the body processes the insulin just fine; it just doesn’t make any itself.  My understanding of T2D is that the body commonly does not process insulin effectively so even though the pancreas is making it, the body cannot metabolize the carbohydrates.  Thus, while people with T1D can essentially eat as they normally would, taking insulin injections to match the amount of carbs, people with T2D often have to heavily restrict carb intake.  So yes, my son can have the cake at the birthday party, but thanks for asking.

I write this all here because after a year of minimal blogging I felt I should explain the inactivity.  My inattention to the blog has a lot to do with time – management of my son’s diabetes at first was very time consuming.  It also has to do with energy, when my son switched to his pump I was waking up three times in the night to check his blood sugar for three months.  But largely it has to do with priorities.  I am chair of the OSU economics department, I am a full-time professor, I have numerous ongoing research projects, I am writing a textbook and I am, most importantly a dad who puts his kids ahead of anything else.  So the blog suffers and I regret it, but not that much.  I keep it alive because I do hope to return to regular blogging someday – it is something I enjoy a lot.

In the meantime, I hope you can all enjoy the podcast Jeff Alworth and I have begun.  This allows me to take a two-hour lunch break and record a conversation primarily about beer but also about the business and economics of brewing.  Please check it out.

I thank you all for your support of this blog.