Fred Thompson checks in with another well researched post (unlike mine) 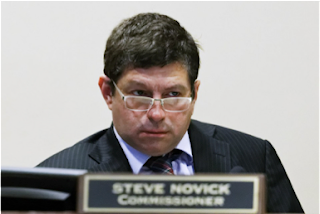 Portland’s so-called Business License Fee (BLF) levies a 2.5 percent tax on the adjusted net profits of about 43,000 companies operating in the city. Starting in 2018, Portland will impose a surcharge to this tax on some large, publicly owned C-corporations. The surcharge will apply to businesses, which are subject to the Dodd-Frank requirement that they disclose the ratio of their chief executive’s (CEO) compensation to the compensation of their median employee and which also have high compensation ratios. Portland’s department of revenue estimates that about 550 Portland businesses will be subject to this reporting requirement. Where reported compensation ratios are equal to or greater than 100, businesses will pay a 10 percent surcharge on their BLF (2.75 percent tax rate); equal to or greater than 250 times, a 25 percent surcharge (3.125 percent).
Portland’s BLF generates about $60 million in revenue per annum. The municipal revenue office estimates that the >500 businesses subject to Dodd-Frank compensation-ratio reporting contribute about one-third of BLF revenue, nearly $20 million per annum, and that the surcharge will boost municipal revenue by $2.5-$3.5 million per year, which implies that nearly all the reporting businesses will be subject to the surcharge, at least one-third of them at the 3.125 percent rate.
This is a novel tax experiment. As Branko Milanović explained: “What I find quite interesting is that it seems [to be] the first tax that targets inequality as such.” For Milanović, it’s novel because “it treats inequality as having a negative externality, like taxing carbon emissions.” Moreover, it isn’t at all clear how Portland’s experiment will play out, which makes it interesting, albeit probably still not in itself materially significant. Policy experimentation is cool, especially elsewhere.
The remainder of this post will focus on two issues:
1.     What is the purpose of this measure? Will it work?
2.     Are the municipal revenue estimates realistic?
Portland spends about $30 million per annum on low-income housing and homeless services. The revenue from the surcharge will be contributed to fighting homelessness, where presumably every bit will help. Moreover, this use of the funds, when combined with its source, ought to reinforce the symbolic power of the measure.
There is an implicit presumption that the measure will cause businesses (some C-corps, anyway) to moderate CEO compensation or boost median earnings. No doubt executive compensation plays a major explanatory role in the explosion in income inequality that has occurred over the past 30-40 years. Forbes magazine recently reported that the average annual total compensation for a Fortune 500 CEO was $10.5 million. This breaks down to $3.5 million in salary and bonus, $3.8 million in other compensation such as personal perk packages, and $3.2 million from exercising vested stock options and awards.
However, compared to the combined total compensation of Fortune 500 CEOs of $5.2 billion, the $3 million that Portland expects to collect through this measure looks like a drop in the ocean. Unless a lot other jurisdictions follow Portland’s lead, it isn’t likely to meaningfully influence corporate compensation practices, one way or the other.


Furthermore, it is possible that Portland won’t even collect $3 million from this measure. As is the case with a lot of things, CEO compensation tends to be characterized by a Pareto distribution, i.e., 20 percent of CEOs get 80 percent of total compensation. That implies an average compensation for the 400 CEOs at the bottom of the Fortune 500 list of about $2.5 million each, well under the $4 million Portland used to estimate the cutoff for the surcharge. When compared with the average median worker compensation in Fortune 500 companies of about $80,000, which boosts the cutoff to $8 million, this implies that considerably less than half of Portland’s top C-corps will be on the hook for the surcharge. Moreover, looking only at the average median worker entirely omits from consideration the possibility that Bloom et al. are correct, that two-thirds of the rise in earnings inequality from 1978 to 2013 was due to increases occurring between businesses, not within them – let alone all the shadier expedients mandatory disclosers could avail themselves of to minimize reported compensation ratios.
at 3:09 PM 1 comment:

Silicon Valley's Relentless Hype About Disruption is Questionable: The Case of Uber

Despite the hype, I have never been convinced by Uber, there is a reason taxi companies formed and is wasn't just radio dispatch.  Other things such as ability to select and keep skilled drivers, economizing on capital stock, insurance and maintenance seemed to me party powerful economic forces.

Uber's premise is essentially that there need be no more central control thanks to smartphones and that there is no such thing as economies of scale in taxi service.  The former might be right, but the latter is questionable.

Now there is this exposé of Uber in the blog Naked Capitalism, nicely covered by the Financial Times' Alphaville blog.  It appears that Uber is one, losing money at an astonishing rate, and two, engaging in predatory pricing - deliberately pricing below cost to drive competitors out of business.
at 1:21 PM No comments: