Here is a picture my colleague, Vladimir Ponczek, sent me and our co-author, André Portela Souza, of a publicity banner for his talk on our research, "Child Labor and Learning," that he is giving today in Manaus, Amazonas.  He says the banner is in the main square and that the Mayor of Manaus is going to attend. 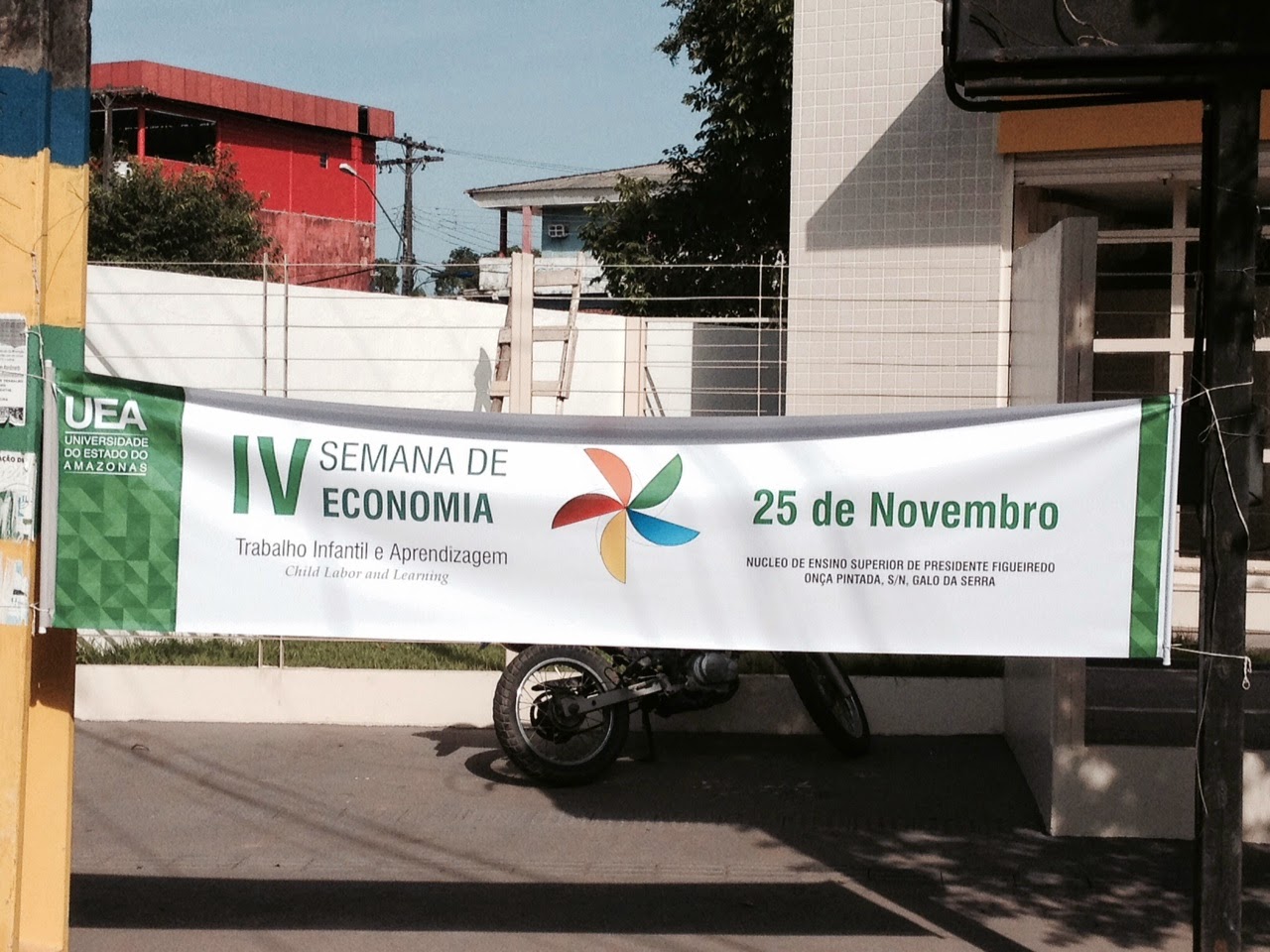 Today Manaus, tomorrow the world!
at 10:38 AM No comments:

A column that appeared in The New York Times' Upshot section caught my attention.  It being election season, David Leonhardt wrote about football being a new partisan divide:


To the list of issues that divide the country along partisan lines, you can add an unusual item: football.

The number of boys playing high school football has fallen 15 percent over the last six years in both Minnesota and Wisconsin, according to the National Federation of State High School Associations. The decline in Colorado has been 14 percent. It has been 8 percent in Massachusetts and Maryland, 7 percent in New York and 4 percent in California

The problem is, of course, the increasing evidence that football is bad for your brain.  This appears to be especially true if played as an adult pro, but there are also worrying signs that it may be bad for high school aged kids as well.

This article, however, got me thinking more about class than political views.  I don't refute the premise above but I hypothesize that you could look at participation in football and socio-economic status (SES), you would find a high correlation between participation in the sport and lower SES.  In fact, if you go to the poll Leonhardt references you find this:

"Highly educated (college degree or higher) individuals were ... about half (46 percent) as likely to be comfortable with sons playing football, relative to adults with lower levels of educational attainment."

So I suspect my hypothesis is correct.  All of this leads to the conclusion that football payers will be increasingly drawn from poorer populations.

At the same time NFL ticket prices have increased: 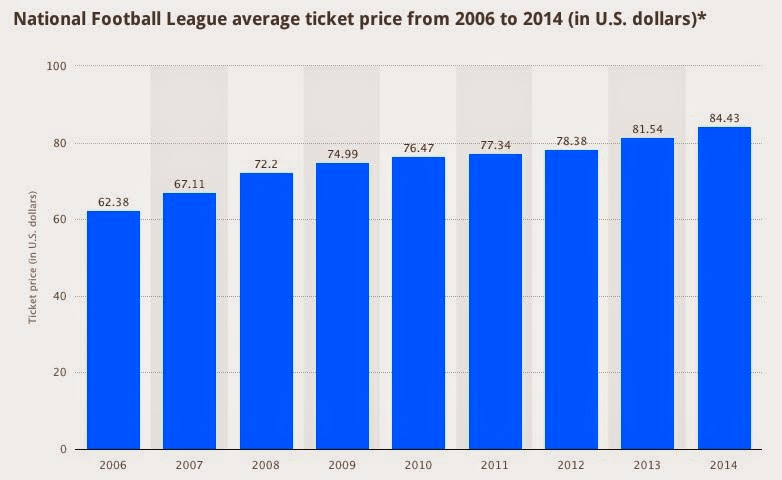 Which raises the specter of poor folks causing themselves serious harm playing a sport in front of rich folks: gladiator indeed.  In the past 'gladiator' has been used to describe the NFL but it appears to be gaining new resonance.

As an academic economist, what interests me is why participation cuts along SES lines.  I think there is a simple model that describes the situation.  A potential participant in football thinks about the expected payoff of participating which could lead to college scholarship and eventual pro paycheck on top of the fun factor.  There is also a payoff to not participating - perhaps less fun but potentially better long term health.  This payoff to not participating depends on the outside option - what would the person do if not play football as a profession.  Those from wealthier, more educated families are likely to have better outside options - colleges and careers less available to poorer kids.

So my model looks like this.  You choose to pursue football seriously if:

As we learn more about the dangers of football to long-term health the expected payoff from participating falls for everyone regardless of socio-economic status.  But the expected payoff from the outside option is unchanged as we learn more about the detrimental effects of football participation but increase with SES.  I have illustrated this below: 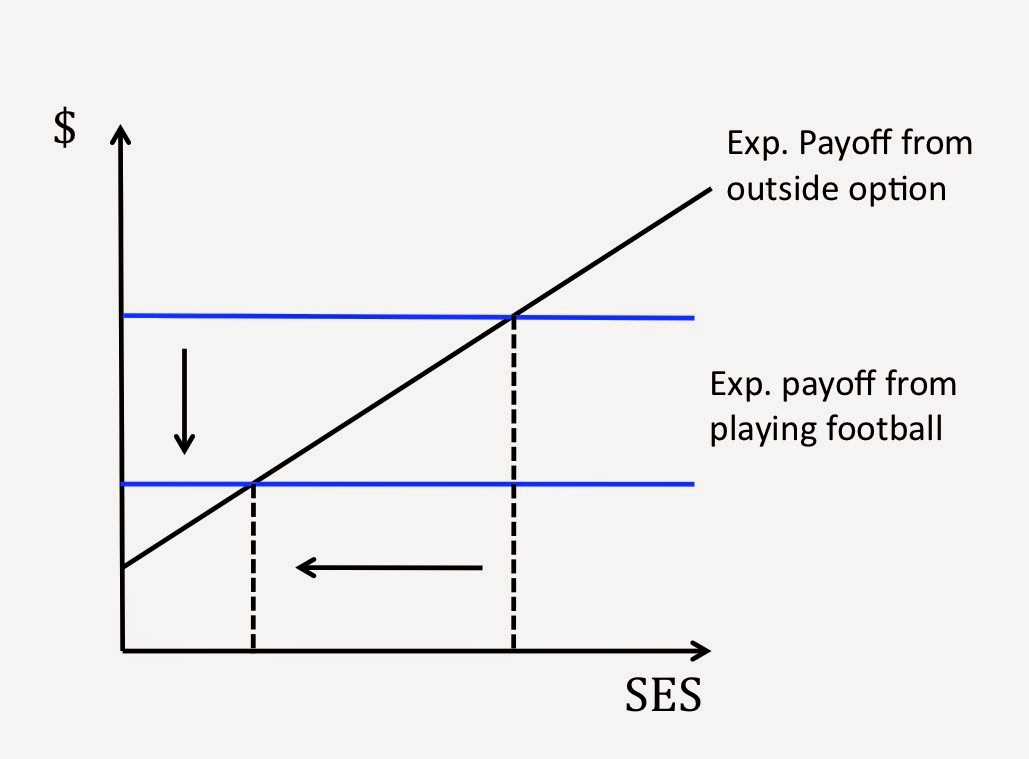 Now, of course, like any model this is a overly simplified (which is the point of models, after all) and there is tons of complexity in the real world not captured here.  But the point is, if this is one of the dynamics going on in football we could quickly come to the point where the gladiator analogy is quite apt.   And we could quite quickly get into some very uncomfortable territory about what is ethical in terms of allowing and sanctioning a sport that causes serious harm to its participants.

I am a HUGE football fan and so I hope there are reforms and ways to make the game safer because I would hate to lose it.

The Economics of Marijuana Legalization

So I am trying to claw my way back into more regular blog posts and what better occasion than the midterm elections coming up to do so...or so I thought.  My well-intentioned plan was to try and inject some economics into the ballot measures, but it has been hard to find time to stop and blog.

So in a last gasp effort on the eve of the election I just do a quick drive-by on what economists have learned about the effects of legalizing marijuana.

In a well-cited paper, my former Colleague Dan Rees and his co-authors, Ben Hansen of the U of O and Mark Anderson, find that: "The first full year after coming into effect, [medical marijuana] legalization is associated with an 8–11 percent decrease in traffic fatalities."  The implication is that marijuana is a substitute for alcohol and easing access to marijuana reduces alcohol consumption and related DUI traffic fatalities.

In a newer paper by Wen, Hockenberry and Cummings, released as an NBER working paper, it is found that the implementation of Medical Marijuana Laws (MML): "increases marijuana use mainly among those over 21, where there is also a spillover effect of increased binge drinking, but there is no evidence of spillovers to other substance use.

Finally, Anderson, Hansen and Rees are back at it with this paper that suggests that the: "results are not consistent with the hypothesis that legalization leads to increased use of marijuana by teenagers." Again, they are talking about medical marijuana.

Recreational legalization is still so new we don't have any good studies yet that I am aware of.  So the takeaway.  It appears that marijuana use by adults increases with medical marijuana legalization but it is not clear whether it it is a substitute or complement to alcohol.  It does not appear to increase teenage use nor lead to the abuse of other substances.

Do with this info what you will.