Fred Thompson with another dispatch:


I had thought about making this month’s contribution to Oregon Economics on the looming teacher shortage in Oregon or the misunderstandings reflected in the public reaction to the Secretary of State’s audit of the $3 billion that citizens and businesses owe the State, but when I went looking for numbers to back up my analysis on the first topic I found I was too late to say much of anything new. Educators have been predicting a crisis for the past two years and even PBS has covered the topic, although they haven’t taken account of the implications of improving job prospects elsewhere for teacher recruitment and retention. As for responding to the audit’s reception this is probably not the best place for that. 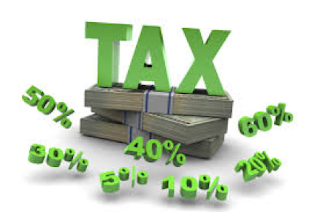 Consequently, I decided to comment on the Legislative Revenue Office’s (LRO) roll out of the updated Oregon Tax Incidence Model (OTIM), which was presented by LRO’s head, Paul Warner, to the House Interim Revenue Committee during legislative days at the end of September. I’ll briefly describe the model and the simulations run by the LRO for the committee, showing how OTIM works. (Disclosure, I am a member the Oregon Tax Incidence Modeling team’s academic advisory board.)

The Oregon Tax Incidence Model is dynamic, general-equilibrium, simulation tool based on a dynamic-scoring model developed for the California State Department of Finance, modified by the LRO and academics from Oregon State University and the University of Washington. OTIM sits on an Impact Analysis for Planning (IMPLAN) software platform, using current (2012) state-level data from the Departments of Revenue and Employment. The model estimates the long-term equilibrium effects of tax changes on state income and output in aggregate and by industry, state, local, and federal tax revenue, and tax incidence by income group. The recent update is the first comprehensive overhaul of the OTIM since 2001.

The LRO reported on the simulated effects of three “revenue-neutral” tax changes. The first looked at the effects of adopting a 0.4 percent gross-receipts tax like Ohio’s Commercial Activities Tax, offset by an increase in the personal-income-tax standard deduction to $14 thousand for a single person and $28 thousand for a joint return. The second looked at a 0.5 percent gross-receipts tax offset by a ‘homestead property-tax exemption” of $125 thousand and the third at restoring property tax assessments to Real Market Value (the situation prior to the enactment of Measure 47) offset by a ‘homestead exemption’ of  $200 thousand. All three of these changes would almost certainly tend to make Oregon’s state and local tax system, arguably the most progressive/least regressive in the nation, even more progressive. However, I’ll focus on the first of the simulations because its results are probably more reliable than are the other two and, in any case, more defensible, since they are, in fact, pretty straightforward.

The following Table shows the gross effects (in millions of dollars) of a gross-receipts tax, offset by an increase in the standard deduction. 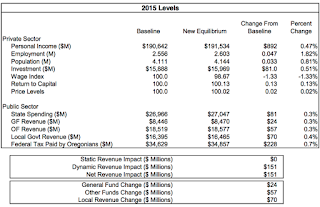 Note that the main effect is to increase economic activity, although not by a lot. This is primarily a result of a redistribution of income to households with higher propensities to spend and, thereby, somewhat increased aggregate demand. Since the model starts where we are now, i.e., with some economic slack, it predicts that the tax changes will result in increased economic activity rather than higher prices.

The distributional consequences of this change are shown in the following graphics. They reflect the design of Oregon’s existing personal income tax system and the effects of a gross-receipts tax under the proposed changes. They are fairly noteworthy.

What’s a gross-receipts tax? Ohio’s commercial activity tax (CAT) is, for example, a tax imposed on gross receipts from all business activities, including most commercially provided services. The CAT applies to most businesses located within the state and also to out-of-state businesses that have ‘minimum contacts’ with the state, but not to non-profit organizations, governmental entities, public utilities, dealers in intangibles, financial institutions, or insurance companies. While not exactly sales taxes (gross-receipts taxes are levied at each stage in a product or service’s value chain creating effective rates for some goods that are many times higher than others), it is not unreasonable to treat gross-receipt taxes as if they were (as does the OTIM) or to presume that their cost will fall entirely to consumers, more or less proportionally to purchases of goods and services that are subject to the tax. The income-tax consequences of increased standard deductions are estimated directly from household tax records, understanding that most high-income taxpayers will continue to itemize rather than take the standard deduction. Hence, like everyone else, they will pay their share of the gross-receipts tax, but would not benefit from the personal-income-tax break (that is also true of low-income households, since they seldom pay income taxes under the status quo).

This is both useful and reliable information. Perhaps the most important point made by the OTIM is that the benefits produced by this tax change are due entirely to the increase in the standard deduction. It also tells us that paying for such a tax cut by gross-receipts tax would not wipe out its gains altogether. Nevertheless, it’s also clear that the net effect would be fairly small.

Moreover, there are policy relevant tax facts that the OTIM doesn’t address. In this case, no estimate is made for the increased administrative cost associated with collecting a new tax. Chances are that the incremental cost would not exceed increased collections, but that is by no means certain (and, in any case, this increase depends on the persistence of a sluggish economy). Furthermore, the model is silent about the dead-weight efficiency costs (compliance and misallocation of resources) a gross-receipts tax would impose upon the economy. Based on Washington’s dissatisfaction with its gross-receipts tax, it is not unreasonable to assume that these are significant, if not necessarily substantial.

Finally, the OTIM is a computational dynamic model, not a stochastic one. It doesn’t tell us what the effect of tax changes will be with respect to the volatility of the economy (in this case almost certainly trivial) or on the volatility of revenues. One thing we know for certain is that revenue volatility is driven primarily by the progressivity of the tax system. This change would make the tax system more progressive, ergo it should increase revenue volatility. That’s not necessarily a bad thing, of course, but it has implications for expenditure smoothing via saving or borrowing that should be addressed prior to a move in this direction.