Soccernomics: Timbers are Third Most Valuable Franchise, Who is Laughing Now? 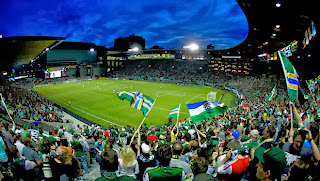 There was some predictable guffawing round about the time Merritt Paulson was contemplating selling the Beavers baseball team and trying to get the city on board with the plan to convert Civic Stadium to a soccer-specific facility.  Soccer, they said, is never going to make it in America, what a stupid investment.

I defended him and the deal at the time and I have never regretted it.  But I was especially offended at the characterization of Paulson as a rich-boy rube that is going to take a bath on the MLS deal and take the city down with him.  Well, it has been a couple of years so let's take a look at where this whole cockamamy MLS-in-Portland thingy stands.

Forbes yesterday released its list of the most valuable MLS franchises and, yes, the predictable ones are at the top, Seattle and Los Angeles, but look which team is number 3: 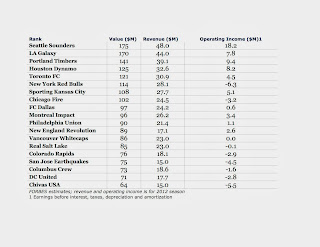 The Timbers had an estimated revenue of $39 million in 2012 on operating income of $9.4 million.  If memory serves Paulson paid $20 million for the franchise fee for the Timbers, now the franchise is values at $141 million and on Tuesday MLS announced the newest franchise will be Orlando City who will pay $70 million.    Seems like a pretty shrewd investment - the Timbers could probably be easily sold for nine figures today - just four short years and a five fold return on investment (okay, there was a lot of other money spent on the stadium and such but still...).

Oh and on the field?  The Timbers are playing in the Western Conference Finals for a spot in then MLS cup on Sunday.  Go Timbers!
at 9:00 AM No comments:

Picture of the Day: Life Expectancy

Form the OECD via the Wall Street Journal: 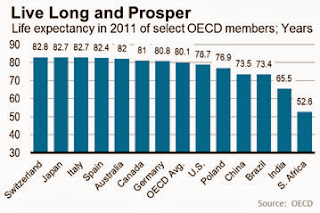 The US is a year and a half below the OECD average.  Given how much we spend per-capita on health care, this is surprising, but when you thing about our private system on top of an ever increasing unequal distribution of income, perhaps not.  Plus, we are fat and eat a lot of bad food.

Anyway, the really shocking aspect of this is the abysmal situation in South Africa - 13 years below even India.
at 9:15 AM 6 comments:

Oregon lost 500 jobs on a seasonally adjusted basis after posting two very solid monthly gains 3,300 in September and 5,600 in August.  Government employment continues to drag on the overall recovery with government jobs declining by 1,000.

The Oregon unemployment rate fell to 7.7% (there was a loss of over 9,000 from the labor force) which is only slightly above the national rate of 7.3%.

So, not much new to say, Oregon has had a sustained recovery for quite a while now but the recovery can't seem to get out of second gear.  The sequester, dysfunctional federal government and continues weakness in Europe are not helping.  But at least the trehttp://www.olmis.org/pubs/pressrel/1113.pdfnd is upward....
at 11:11 AM No comments: 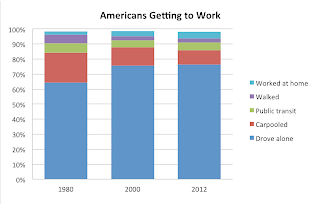 Last week I posted a graphic from the Wall Street Journal about how much commuting alone has increased in the US since 1980.  This struck me as at odds with the narrative of the new urbanism and the reclamation of urban cores in the 21st century.   I lamented not seeing the 2000 numbers and posited that the big move in the graph was more about 1980s and 1990s sprawl.

Well, fortunately, friend of the blog Josh Lehner looked it up and...sure enough the big jump was in the 80s and 90s.  In fact, the public transportation percentage has actually increased since 2000 as has the telecommuters.

This AP story, picked up by OregonLive, made me think of the oft asked question from prospective Econ majors: "what can I do with an econ degree?"  The story is about how the US Dept. of Justice has reversed course and is now ready to give its blessing to the US Airways - American Airlines merger:


The Justice Department says it has reached an agreement to allow American Airlines and US Airways to merge, creating the world's biggest airline.

The agreement requires the airlines to scale back the size of the merger at Washington's Reagan National Airport and in other big cities.

In August, the government sued to block the merger, saying it would restrict competition and drive up prices for consumers on hundreds of routes around the country.

The airlines have said their deal would increase competition by creating another big competitor to United Airlines and Delta Air Lines, which grew through recent mergers.

The settlement reached Tuesday would require approval by a federal judge in Washington. It would require American and US Airways to give up takeoff and landing rights or slots at Reagan National and New York's LaGuardia Airport and gates at airports in Boston, Chicago, Los Angeles, Dallas and Miami to low-cost carriers to offset the impact of the merger.

What happened in the interim? Well, a lot of economists made a lot of money.  You see every big M&A gets scrutinized by the government and a lot of economists employed by the DOJ analyze the impact of the proposed deal on consumers and the companies themselves hire big economics consulting firms like NERA to do their own analysis.

Clearly in this case there DOJ was concerned that the merger would leave quite a few markets with too little competition and so a remedy was agreed on.

The economic consulting business is booming and the salaries are fantastic - something to think about if you are considering the Econ major.
at 11:32 AM No comments:

Picture of the Day: Commuting Alone in a Car

The Wall Street Journal has a fascinating look at commuting trends.  Here is the graphic that shows how much driving alone has increased since 1980 and how much public transit has fallen (despite all the fixed rail investments during this period).  But the really striking decline is in carpooling - I wonder why?: 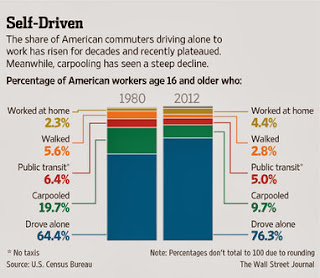 Fred Thompson: Is your Property Tax Bill too High?

NOTE: I am in Brazil again for a short time to put a bow on the dual research projects I have going here - so once again the blog gets short shrift.  Luckily, Fred Thompson is back to save the day... 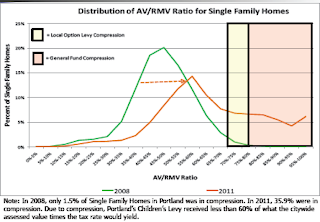 The bad reason lies in how some county assessors have interpreted Measure 50. Among other things, Measure 50 stipulates that your assessment will be the market value of your property or 103 percent of last year’s assessment, whichever is less. You all know what has happened to home prices in Oregon over the last five years. According to the Case-Shiller home price index, median home prices maxed out at 187 in July 2007, dropped to a low of 130 in March 2012, and have subsequently recovered to 155 in June 2013. In many Oregon communities, the fall in house prices led to reductions in assessments. 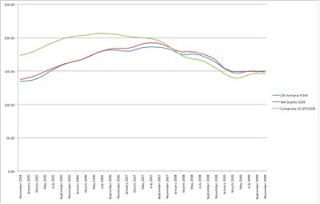 However, some assessors interpret the Constitution to mean that the maximum allowable assessment continued to compound at the rate of three percent per annum even when declining market values caused actual assessments to dip below that level. In which case, they reassessed your home to $144,900 and your tax bill went up more than 15 percent this year.

This outcome violates the logic of Measure 5, which sought to stabilize tax bills, fairness, since it penalizes property taxpayers with the highest effective property-tax rates, and the plain language of the law. It’s just not right.