How You Get Away With a Lousy Public Education System

By many metrics Oregon has one of the worst public education systems in the Untied States.  Oregon's per-pupil funding is 15% below the U.S. average,  Oregon's low graduation rates are 48th worst in the nation, Oregon has the highest absentee rate, and one of the shortest school years in the nation and we have below average standardized test scores in math and reading.  And yet, Oregon's economy is doing well, we have a tech sector and a creative sector that are doing well and we are constantly seen as an attractive place to locate.

It is this last bit that is the key: if you are a complete failure in educating your own children, you better be good at importing educated young people from other states.  Luckily, we are. 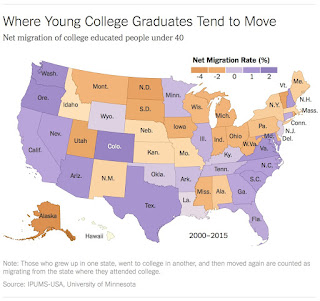 So next time you get all worked up about the relentless migration of young people and families from California and other parts of the U.S., remember that without them, we'd have to rely on the poorly educated sons and daughters of Oregon.  Woe the thought.
at 3:52 PM No comments:

It has been a very long hiatus - I have had a series of things that have demanded my time and taken me away from blogging.  But through industry, time and fate I suddenly find myself (and by sudden I mean as of today) with a more manageable work-load and my thoughts drift to going back to doing some stuff I enjoy.  I imagine that I have lost nearly all my audience, which is okay, it is actually a lot easier to write when I imagine no one is reading, but I thank Fred Thompson for single-handedly keeping this thing alive and preserving a small audience of super-wonks....

...which I will now do my best to alienate.  I'd love to come back hard with a deep-dive into some state policy topic, an extended piece on my interpretation of the economic impacts of a Trump presidency but that would short-circuit my start before it even began because I would find it too daunting and not fun enough.  So I come back with thoughts on one of my favorite pastimes: soccer. 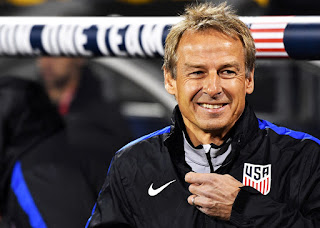 Yesterday the US Soccer Federation decided to fire the coach of the national team and its Technical Director, Jurgen Klinsmann. Bruce Arena, onetime coach of the US National Team and current LA Galaxy coach will be hired as his replacement.  To me this represents a switch back from the aspirational to the pragmatic and I, for one, am disappointed.  I am not sold on Klinsmann being a great coach, in fact I am pretty sure he is not.  But I think that is secondary to his role as an aspirational leader for the direction of the USSF.

In the past, and continuing to the present, elite soccer in the US has been built on two things: pay-to-play and athleticism.  Because of the socio-economic inequalities, this has caused the exclusion of youth from immigrant communities where technical ability and flair is prized and soccer IQ is extremely high.  It has promoted the advancement of big-fast-strong soccer robots who are taught to play very directly, do a set few things and limit their independent thought.  The problem with this approach is that the game based on direct-play, athleticism and lack of autonomy is boring to play, boring to watch and ever less competitive in top-flight professional soccer. And yet our entire national soccer mechanism incentivizes exactly this.  This is a very coach-centric approach and is a spill over, I think, of the sports culture of the US which is based on coaches being in charge.  But soccer is pretty unique in that it is not like that at all.  Once the game begins the coach has almost no control- it is up to the players to figure it out themselves.

So the US National Team in the past has reflected this culture and the American coaches hired to coach the team have been very good, very pragmatic coaches.  They know the talent they have and they know how to maximize it - play direct counter-attacking soccer that relies on athleticism.  That is a fine an defensible approach but it reinforces the problem: there is too little emphasis on technical quality and intelligent play.  As the US team is a model for kids in this country much more than the pro leagues (unlike most of the world) it only causes an exacerbation of the problem.  It is an emphasis on winning, full stop.

What Klinsmann represented to me was the idea that we could and should strive to be more.  That we should aspire to create intelligent technical players, that we could play an attacking style with flair and skill, that we could keep possession of the ball and complete with the best.   What I think Klinsmann recognized is that without a native soccer culture and as the touchstone for all of US soccer, the National team had the unique power to be the agent of change in the US.  To become an aspirational model for what US soccer could look like.  This is why, I believe, he looked so hard for players in Europe who were more technical and intelligent, to show the way to younger players.

He did a lot to move the USSF along behind the scenes as the Technical Director - from the youngest ages on up.  As a youth coach myself, I have seen the changes first-hand and though I don't always agree, I mostly do and I see the results every weekend as every year (and this past fall in particular with a number of rule changes, the most important being that U11 and U12 players play 9v9) I see more and more teams playing a possession-style game and eschewing the direct play that used to be the norm. But there is a long way to go: the very elite levels of youth soccer are still results-based and thus the all too easy shortcut of selecting on aggressiveness and athleticism still wins the day.   They are also extremely expensive and exclude the very best talent which is in poorer immigrant communities (largely Latin American but not exclusively). So we have still have a very long way to go and the youth clubs themselves, whose existence is based on the pay-to-play model, will resist change.  This is why an iconic figure like Klinsmann was important - he had the power of persuasion to get all the thousands of clubs (and the USSF) itself moving on down the road.  In other countries there are soccer clubs with senior teams that compete in an open system with promotion and relegation where there are incentives for the clubs to find and develop players, in the US it has to come from the top.

So now we are back to pragmatism.  I hear the term 'American style' of play - as in 'Klinsmann did not understand the American style and thus players were uncomfortable and under-performed.' To me this is just saying that all American players are good at is running and fitness so don't ask them to do more or be more.  Apparently, that is what we are going back to.  If that is a good thing for soccer players, why are there so few Americans playing in European professional leagues?   American exceptionalism does not translate to soccer and I lament the passing of the Klinsmann era.
at 11:22 AM No comments: