Oregon and the Bottle Bill 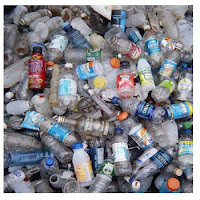 Recently, the Oregon Bottle Bill was expanded to include more types of bottles, including plastic water bottles like those in the picture. The original bottle bill was the first of its kind in the nation and has been credited with greatly reducing litter and with giving the recycling movement a huge boost. All of this is nice, but it also imposes a cost on consumers and retailers and may lead to lower sales for beverage manufacturers. So, is it good public policy?

How I think about this problem is first by focusing on the market failure: externalities. Litter despoiling our landscape, excessive amounts of garbage filling our landfills and excessive use of raw materials (aluminium for cans, say) are all real and not unimportant costs that we all pay when bottles and cans are not recycled - economists call these social costs. However, the costs paid by any one individual disposer of a beverage container is very small, especially compared to the social costs. Thus, this activity has a negative externality associated with it: the private costs are smaller then the social costs. In these cases (where negative externalities exist) the individual incentive to refrain from excessive use and disposal of containers is too small relative to what is optimal for society. This is a classic case for government intervention - similar to the case for government regulation of pollutants from industrial activity. So I buy that there is a strong case to be made for regulation, but at what price? Is this problem worth the cost of the solution?
Here we have to veer off into the realm of conjecture, but it seems clear to me that a $0.05 refundable deposit is a very small cost (the true cost is the time value of the money - i.e. not being able to earn interest on your nickel - and the expense and effort of redeeming the containers) for consumers. For retailers, with the emergence of automated container collection points, it appears that the cost to them has been reduced quite a bit as well. But it is not insignificant: the up-front cost of the machines, the space needed to house them and the expense and effort of handling the used containers are all real. However, I do not notice a large difference in the price of beverages between stores in Oregon and Washington, for example, so I conclude that it is probably not a terribly significant expense.
Finally, there is the question of the recycling itself. Critics argue that recycling uses more resources than it saves. I cannot judge the veracity of this statement, but I will say that with non-renewable resources and toxic pollutants, I think that it is an argument that is not terribly convincing. Even if true however, the motive for the bottle bill is not only energy resource conservation but litter control as well.
So, in the end, my opinion is that the market failure is real and serious, the remedy relatively cheap and painless and thus a very good example of sound policy. One of the things I like most about the policy is that I can choose to pay the extra five cents and dispose of the bottles in my own recycling rather than have to redeem them. Few economists would argue with my description of the market failure, but many may quibble with my analysis of the costs and benefits of the remedy. This is true of most economic policy issues, economists tend to agree on the fundamentals, but disagree on the costs and benefits.
at 3:05 PM