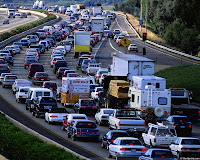 Busy day again today, so I'll pose this as an open question rather then a soliloquy: are more roads better or worse for the environment and climate?

Those who oppose the bigger Columbia Crossing project and the Oregon transportation bill saying that more roads will lower the cost of driving and thus encourage more of it are certainly correct in general (though I am sure there is a diversity of opinion about how much this matters) . But it is also true that congestion is terrible for the environment: all those cars idling in stop and go traffic are belching emissions at a hugely greater rate per mile than free flowing traffic.

So where is the balance? How much do we want to encourage congestion as a way to reduce driving?

My view has always been that the problem is carbon emissions so we need to address carbon emissions through a gas tax. Full stop. So let's reduce gas consumption, but work to alleviate congestion (congestion pricing is a good idea for this as well). What are your thoughts?

Oh and the fact that the transport bill includes a gas tax is good, but don't confuse this bill with stimulus as I think backers are trying to do (though they don't say it directly). Stimulus comes from borrowing from the future to stimulate the economy today. Tax and transfer schemes are different. It is possible that this is a good investment in the growth of the Oregon economy, but the emphasis on jobs created is misguided and confuses these types of investments with stimulus.
at 9:09 AM

I think you're basically right. Clearly, more roads will lower the cost of driving and lead to more travel. And congestion is bad for multiple reasons, some of them environmental (though relative to other huge costs we impose through our lack of proper transportation infrastructure, I think this is pretty minor).

But you don't say much about the obvious conclusion: alleviating congestion itself lowers the cost of travel, and over time people adjust by...traveling more. Until congestion levels increase again.

It strikes me that in the long term, congestion is a necessary result unless we are willing to fully internalize the externalities of driving. Yes, carbon taxes are a good idea, but even if they happen they won't be high enough to reflect true costs of driving and hold down demand while we build more roads. So, it makes sense to shift those funds to making transit more attractive instead of building more roads.

My personal idea is that we should not build more roads but, as you say, work to reduce emissions. Part of that defnitely should be encouraging alternate methods of transit - lightrail, busses, bikes. But, also, developing lower emission vehicles (I drive a smart car) and electric cars. I'm all for things like gas taxes as a way to promote these ideas. I'd also support taxes on those who purchase vehicles that get low gas mileage. Also recreational gas guzzlers like boats and jet skis. There's a lot to be said for a multi-pronged approach although I suspect that the summer price creep will also do a lot towards helping people find ways to use less gas.

I am not thrilled by all the money spent widening roads, but if that is the price to pay for substantial investments in mass transit infrastructure, like extending light rail across the Columbia, then so be it.

I think it's also important to consider that relieving congestion is not the only reason for many of these projects. Safety and the replacement of obsolete infrastructure is important as well. Additionally, half of the money from the gas tax will go to cities and counties, which all have huge maintenance backlogs, so a lot of this is about maintaining what we already have, which has been difficult to do with no gas tax increase since the early 90s and losing much of its purchasing power due to rising costs for road construction. So I see this 6 cent increase as the first step of hopefully many to reinvest in our transportation infrastructure.

I am also hopeful that congestion pricing and other innovative solutions might be tried, and I believe that the current version of the bill includes authorization for the Portland metro area to try a congestion pricing experiment.

I also think there is an argument for future gas tax increases to fund transit and investment in high speed rail. Since these types of projects would also reduce congestion, which drivers would benefit from, they ought to help pay for them.

Gas taxes are ideal for reducing emissions. The best part is that even if they do not reduce demand completely (as Gary notes) they raise revenue that can be used for carbon offsets. The main drawback in my mind for a gas tax is its regressive nature. People who have less means to live where they work get hit harder. Redistributing through the income tax would be one way to address this but is there a better way- given not all the beneficiaries will have paid more in gas tax?