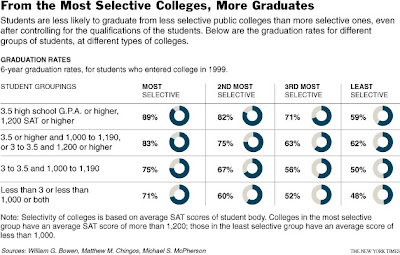 The New York Times' David Leonhardt has a provocative piece on the graduation rates of US colleges and universities. The essence is that some universities have pretty abysmal retention rates and that this represents a massive failure of the system. Now, of course, the first criticism is pretty obvious: if you want better graduation rates all you need to do is just lower the bar. A more thoughtful response is given in The Economist magazine's Free Exchange blog. In it the author points out that a lot of economic research has shown that troubles in education start early. So even though students from poorer schools might end up in universities that are lower ranked than ones in which they could have enrolled, their preparation might be very different than students form more wealthy schools - a difference perhaps not well measured by GPA and the SAT.
Looking at the chart above from the NY Times article, less selective colleges do worse than more selective colleges across the board. The explanation for this is not just the level of preparation of students (though I suspect that this has a lot to do with it), but the resources available to students who struggle academically.
I have taught at three very different places: Cornell University, Oregon State University and the University of Colorado Denver (listed in order of selectivity). At Cornell, 'at risk' students are identified before they even arrive on campus, their performance is monitored while classes are in progress and an entire office staffed with full time professionals and a cadre of student tutors are ready to serve these students. Any red flags in performance are responded to by reaching out to the individual student with offers of help. By contrast, poorly funded state campuses like UCD offer almost nothing and most students there are on campus only when they have classes and are juggling full-time or close to full-time jobs. The difference in the average preparation of students for the college academic curriculum is also markedly different. It is little wonder, then, that retention rates are very different across these two campuses. Making more resources available to students will inevitably help, but better K-12 education is just as, if not more, critical in my opinion (though this is informed opinion, nothing more - I'd love to see more data).
[Thanks to commentor Oliver for the tip]
at 9:29 AM