What Passes for Good Economic News in Oregon 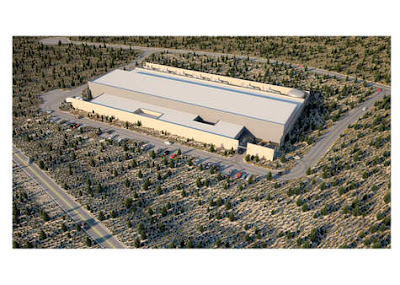 Don't get me wrong, any investment in the state is great, especially now, and especially for a community like Prineville. But the amount of attention that the decision by Facebook to build their first data center in Prineville is receiving is a little out of whack. For example, the Oregonian editorial board cheers this as a major statewide success story - but then these are the same folks that urged a no vote on 66 and 67, and I see a clear connection between the two.

You see, this type of investment is indicative of where Oregon has arrived in terms of its investment in human capital and in research and innovation. What comparative advantage the state has at the moment is in cheap power, cheap land and cheap labor. This is not a success story this is a failure story. What the state needs to be is a place where we have a comparative advantage in human capital and technology, and that means investments in education and in research in partnership with research universities. What we are is a poor and poorly educated state that is like a domestic developing country that will do the low value-added work because it is all we can get.

So the real story should not be how wonderful this investment is, but what does it signal in terms of the future of the state's economy? The fact that The Oregonian's editorial board didn't ask this question is a clear signal that they just don't understand the fundamentals of economic growth. Because if you think this is a good path we are on, I got news for you: As much cheap land, power and labor we have, there are many, many more countries that have much cheaper land, labor and even power. I don't know the technology too well, but I suspect that the only reason this data center is here (as well as the Google data center in the Dalles) and not in China is due to some specific costs involved with distance and the provision of bandwidth. More and more manufacturing, even in high-tech, is leaving the state and the forces of globalization are only getting stronger, which means our competitive edge has to be that we are on the technological frontier or we will be competed away. Without hugely increasing our commitment to education in this state, it is hard to see how that could happen.
Perhaps a good question to ponder is why isn't Facebook itself in Oregon? When I was visiting relatives in the Bay Area over the summer I passed Facebook's corporate headquarters on Page Mill Road in Palo Alto - right in the heart of Silicon Valley - on some of the most expensive real estate in the world. The reason it is there is because, despite its expense, Silicon Valley offers many advantages: a rich supply of highly skilled and knowledgeable workers, close proximity to venture capital, proximity to business partners and proximity to Stanford and Berkeley, two enormous engines of new research, technology and ideas. In other words, despite absolute disadvantages in terms of cost, the Valley still has a comparative advantage because of a cutting edge technological environment, proximity of businesses and human capital.
Silicon Valley did not happen by accident, but neither was it engineered. If the state of Oregon thinks it can buy its way, through tax breaks, to become the center of renewable energy research it is wrong and it is ignoring the lesson of Silicon Valley. Only by creating an environment of high human capital and technological innovation can Oregon have any hope of creating the next Silicon Valley.
at 5:12 PM

Sorry, had to fix some data.

ugh excel you are my bane. shifted data on national averages, should be:

I agree completely, although I suspect we might disagree on how to invest in higher education. I'm for considering phased privatization for our brand name universities (Stanford in Palo Alto is, after all, private) and shifting to scholarships rather than institutional funding for our higher ed educational component, while targeting and increasing state funding for research.

We are not going to have much more, if any, money to invest in public education. So we must invest differently.

While I largely agree with the macro view you have on this development, I don't think I would call this a step in the wrong direction -- for *rural* Oregon, anyway. Towns like Prineville have never and will never be centers of innovation or cutting edge development. They are essentially factory towns. They existed as centers of rural trade and resource-based manufacturing. Google, Facebook, et al data facilities offer these towns the possibility of remaining viable into the future.

Innovation, if we are to achieve it, comes from the urban centers -- I'll be generous here and count any city "blob" of about 150k, thus pulling in more than just Portland. And in that case, a lot of the rhetoric of the creative class was aimed at trying to attract that kind of innovation.

One thing that must be considered is that such dynamics may not be possible to create through government action We've seen attempts to bring BioTech here, to bring "advanced manufacturing" (whatever that is defined as this week) here. Nothing has ever quite taken off. This leads me to the question: can there really be *two* Palo Altos? There's a great danger in trying to be somewhere else, and civic envy is neither pretty nor generally successful.

Once again you hit the nail on the head.

Also note that under single sales factor apportionment Facebook will likely be a corporate minimum tax taxpayer (if Measure 67 passes they may pay just $150 because they will have no "Oregon sales" from this data center vs the $10).

I remember Texas being in similar shape in the early '80s, when the price of oil was very cheap. They did a pretty good job of diversifying into high tech, with, arguably, less talented human assets. What worked was that successive administrations accepted the challenge, rather than making it a partisan issue.

The U of Texas system is arguably the most well funded system of public higher ed in the US (thanks to a large oil-fueled endowment). I would suggest that resource wealth invested in human capital may be a big part of the story of Texas's high tech success.

I agree, throwing money at the problem does not necessarily mean better education, and there may be some institutional changes that are worth considering. But having a short school year and large classes are two things that have been shown to hurt student achievement. So there are some obvious areas where the state needs to catch up.

My info. might be dated, but the UT funding used to be a little more complicated. There was a Texas law that you can't move money between gov accounts. Oil funded capitol projects, but things like books came from alumni contributions. I remember when they built a beautiful library out of oil revenue, then didn't have any money to buy books!

One thing Oregon could certainly imitate is the education/cost of the UT system. I would argue it is the best value for money in the nation. That's certainly a good place to start in Oregon, imho.

Great post, Patrick -- absolutely a reflection of the small thinking that often surrounds this sort of thing. Good for Prineville, sure.

If you will permit an anecdotal observation..as a Portlander spending a lot of time here in the Bay Area, yes -- there is a markedly different mentality here. It just "feels" like the sort of place where things get done. For a company like Facebook, I'm sure that access to investors and skilled workers (as you suggest) is important, but I'd also guess that being in an environment near other Internet companies is pretty important. I thrive on being around smart people who are working in similar areas, regardless of whether or not they're working for the same company as me.

IMHO one of the most deceptive and oft-heard remarks is: "throwing money at the problem is no solution."

Ceteris paribus, of course it is.

The New York Yankees don't win the World Series every year, but they win much more often than any other team. They spend more money.

Harvard does not garner its renown because of its overwhelming endowment compared to other schools, but its endowment allows it to take chances and to make plans along a longer time continuum than other schools.

To paraphrase St. Paul, the race is not always to the swift, nor the contest to the strong, but that's the way you bet.

Half of Oregonians are suspicious of the educated class, and the other half think they can somehow cheat the system and get the benefits without the expense.

It doesn't help that boomer Americans are the most anti-intellectual in history. Boston has always been an exception. Hopefully, since folks seem to gravitate towards education as they age, that trend is on the decline.

It's ironic that Oregon would have this prob. Wasn't one of the demographic differences in its original pioneers, that where the Oregon trail split from the way to Cali, there was a gold painted quartz rock to show the way to Cali, and a sign that said, "Oregon" for The Trail? Our pioneer stock are supposed to appreciate education.

My name is Jason Carr, and I'm the Economic Development Director for Prineville & Crook County. I have written a response to this post, but created a google doc, since what I wrote had too many characters.

Thanks for chiming in. I, for one, cannot view the document - google won't allow me.

Even though I haven't yet read it, I want to be clear: I think this it great for Prineville. What I was commenting on mainly was my view that the media is making too much out of this particularly as a sign of the health of the overall Oregon economy.

Thanks for clarifying your position. I would agree with you that this one project certainly does NOT point to a robust recovery, or that Oregon's economy is now saved.

Jason, I have no doubt about why Prineville made the deal they made, but I will note that because of a tax law change that large multistate corportions won a few years back the State of Oregon will likely get get only $150 a year from Facebook in corporate income taxes. Prineville and the county rely on state dollars, and Facebook will be doing precious little to contribute to that. Feel free to contact me directly -- see www.ocpp.org

Chuck, did you guys maybe do a Centerpoints or press release about that law change, that you could direct me to? I'm interested in which law it was, and the surrounding politics.

Pete (and others) see http://www.ocpp.org/cgi-bin/display.cgi?page=cp0701singlesale -- be sure to check out the Nike example on the left side. Also just type in "single sales factor" in the OCPP.org search box and you will get to all of the materials we've written on the subject.