Since I am otherwise occupied, here is some smart writing on the US jobs report for July. 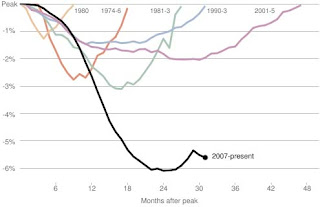 The chart above shows job changes in this recession compared with recent ones, with the black line representing the current downturn. The line has ticked upward since last year, but still has a long way to go before the job market fully recovers to its prerecession level. Since the downturn began in December 2007, the economy has shed, on net, about 5.6 percent of its nonfarm payroll jobs. And that doesn’t even account for the fact that the working-age population has continued to grow, meaning that if the economy were healthy we should have more jobs today than we had before the recession.

This morning’s jobs report is not easy to decipher. All in all, it suggests that economic growth remained slow in July, but it also offered a reason to hope the economy might be on the verge of picking up speed again.

State and local governments also cut jobs — 48,000, combined — which is yet another sign that federal aid to states is needed.

Last month’s unemployment rate — based on a survey of households, which is much smaller than the survey of employers — remained steady, and it actually fell in June. But that’s not meaningful. In both months, the share of the population with jobs dropped. The unemployment rate did not only because a significant number of people stopped looking for work, according to the Labor Department’s household survey, and thus were not counted as officially unemployed.

The bottom line is that job growth has not been fast enough to keep up with normal population growth.

As I mentioned above, though, there were some glimmers of hope in this jobs report.

The length of the workweek increased in July, to 34.2 hours, from 34.1 hours. It had shrunk in June. The workweek is now longer than it has been since January 2009. It’s common for employers first to increase the work of their existing employees before they begin hiring new ones.

Wages also rose in July. Average hourly pay increased to $22.59, from $22.55. Hourly pay, even after adjusting for inflation, is now at a high, despite the terrible recession. However many employers are cutting pay, more are evidently increasing it.

And for the third consecutive month, there was a drop in the number of people working part-time because they could not full-time work. Slightly more than 8.5 million workers were in this category last month, down from 9.2 million in April. When the recession began, in December 2007, only 4.7 million people were.

State and local governments shed 48,000 jobs in July, the biggest drop in a year and almost double last month’s drop, according to today’s employment report.

State and local government have cut a combined 169,000 jobs this year, including 102,000 over the past three months. Friday’s report suggests job losses could continue to accelerate as states grapple with weak tax revenues and the loss of federal budget support later this year. July is the first month of most states’ 2011 fiscal year, so the month’s job losses reflect budget decisions that were made months ago but don’t translate to job losses until the fiscal year turns.

Local governments shed 38,000 jobs in July. States cut 10,000. Local government — everything from cities to school boards and transportation districts — account for 14.3 million jobs, compared with 5.1 million for states. More people work in local government than in the entire manufacturing sector.

Email ThisBlogThis!Share to TwitterShare to FacebookShare to Pinterest
Labels: US Unemployment