Oregon November Unemployment: Rate Steady at 10.6% but Another Good Month for Jobs

You may remember that the national employment numbers for November were a huge disappointment - very few new jobs were added, when a big gain was expected.  Well in Oregon, largely because of the disappointing national numbers, I expected a very low job gain number and have been surprised again, this time pleasantly so.  6,300 jobs were added in Oregon in November, following 6,700 in October.  Two back to back healthy job gains is good news in this horrible economy.  The unemployment rate is essentially the same at 10.6%

Why the job gains and no budge in the unemployment rate?  Well, Oregon's workforce continues to grow, in fact for the first time ever, Oregon's civilian labor force has eclipsed two million people.  This is most likely due to population growth as Oregon is still a net in-migrtation state.

So it is good news but to give a healthy does of perspective here is a look at the employment numbers from the last decade: 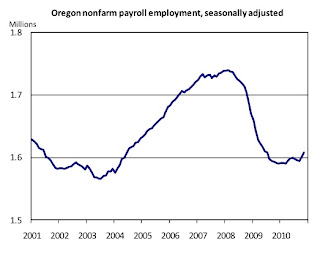 Let's hope that this time we can keep the momentum going.

As for which sectors showed growth and which didn't the good folks at the Oregon Employment Department made this nice graphic:

Construction is still hurting badly, but trade and transport showed robust growth.
at 10:24 AM