The news that the huge delays and problems with the locally built streetcars will cost Tri-Met a bunch of extra money to pay for oversight of the engineering work by United Streetcar brings me back to a post I wrote a while ago.  What I said then, and bears repeating now, is that by insisting on building our own streetcar we are ignoring comparative advantage and that could cost us.

The objection is that by buying local ones we are helping the local economy, putting local people to work, etc. And in this one specific case this is true.  But overall we are not doing ourselves any favors.  We are essentially wasting money buy buying a more expensive and potentially less reliable product.  That is money that could have been invested rather than wasted which would be a net gain to the economy.  We may have put a specific few lucky iron workers to work but the rest of the economy suffers.  [As a quick example think of the unemployed bus drivers who can't get work because Tri-Met has to cut back on busses thanks, in part, to the extra cost of the local streetcars]

I am pretty confident this is true at the moment and for the short term, but does it mean we made a mistake?  Not necessarily.  Once we look at a dynamic model it may turn out that investing in local streetcars was a good idea.  How? Well consider the idea of the learning curve.  Currently United Streetcar of Oregon is suffering from a decided lack of experience in building streetcars, but they are learning and eventually they could become a low cost provider.  Here is the basic model in a single graph from Krugman's International Economics text: 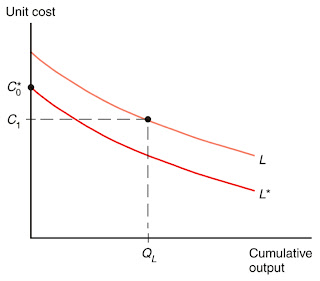 Suppose Inekon's cost curve is the upper one labeled L and United Streetcar is the one below labeled L*.  Currently, because they have been doing for a while and know a lot about building streetcars, they are at Q* and there unit cost is C1.  United Streetcar is just beginning and so their cost is C0, which is higher than C1.  Over time, however, they will learn, their costs will come down and they may actually be able to better Inekon in terms of cost. So by supporting a fledgling local industry now, you may create a competitive and viable industry later.

But, and there is always a but, is there any reason to suspect the cost curve of United Streetcar to be below that of Inekon?  I suspect not from labor costs alone.  But there is also a similar model whose graph looks almost identical except instead of a learning curve it describes economies of scale.

If you change the horizontal axis to total current output instead of cumulative output you get a story of economies of scale.  In fact with economies of scale, United Streetcar's cost curve can be the upper one and Inekon's the lower one, but if United Streetcar can grow to a sufficient size while Inekon stays relatively small, United Streetcar can gain the cost advantage purely through scale effects.    My doubt about this story is that it is hard to imagine the streetcar market growing to one where there is sufficient output to justify mechanization of a lot of manufacturing processes that is the source of a lot of economy of scale effects.

I also doubt it because other communities are getting in on the act.  Seattle announced last year that their streetcar would also be manufactured locally - though you'll notice that it is in partnership with Inekon and the streetcars will be assembled locally but most of it will be manufactured in the Czech Republic.  Anyway the point is if all US cities doing streetcars start manufacturing locally, than there will be no great scale effects coming to United Streetcar.

So consider this a cautionary tale: what seems great for the local economy could just be doing it harm.
at 11:40 AM

You could accomplish the same thing with Double Decker buses (already in use in Las Vegas and Everett WA. also london, Berlin, Hong Kong, Dublin, Toronto, Victoria) for a small fraction of the cost.