Fred Thompson: Capitalism Is Biased In Favor Of Capitalists II

This is the second in a two-part review by Fred Thompson of Thomas Piketty's book: Capital in the 21st Century.  The first part was posted yesterday. 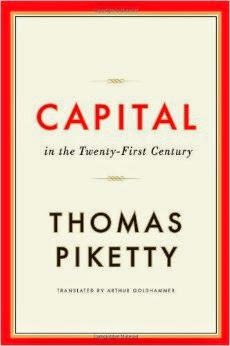 Given Piketty’s narration of the German case, it’s mildly surprising that he doesn’t give greater attention to corporate governance, which is very much a product of deliberate policy – perhaps because they were products of deliberate policy. As he notes, his theory fails in the German case when he uses stock market valuations instead of book value. Why? Because, under the German “stakeholder model” of corporate governance, shareholder rights to cash flows are relatively weak. German managers/directors have broader obligations than their American counterparts and greater discretion to pursue growth and stability at the expense of profitability. Consequently, they throw off far less of the economic value their businesses generate to shareholders; instead, they retain more of it, presumably in the best interests of the remaining stakeholders.

Anglo-American shareholder activism, together with various tax policies, seems to have had two effects, a large and sustained increase in the value of publicly traded shares (the main driver of β in the economy) and a decline in the economic weight of publicly traded enterprises, whether measured in terms of output or employment shares, relative to privately-held businesses. Bankers and fund managers aside, more than anyone else, the owners of these enterprises have benefited from the economic growth of the past 30 years or so. Moreover, since the 1986 tax act they have been able to avoid double taxation by extracting profits from their businesses in the form of wages (and precluded from expensing personal consumption to their businesses). Consequently, business owners’ reported (and very likely their real) incomes have soared since the enactment of the 1986 tax act.

Unfortunately, we cannot say for certain exactly how much. The Haig-Simons income (Y) definition – consumption plus the change in wealth (∂K) – is the standard one in the literature – the Platonic ideal if you will of income (i.e., GNY = C+S, where S = ∂K). Wealth (K) is the present value of the future income stream associated with the bundle of property rights comprising one's endowment, which is a stock. The change in wealth (∂K) over a finite period is a flow. We don’t measure any of these things directly, but instead infer their values from data acquired for other purposes: collecting taxes primarily and measuring aggregate consumption.  As a result, exactly how much real income inequality has increased in the U.S. is open to question, and the timing and causes of this phenomenon are even more so.

Nevertheless, most analysts agree that income inequality has increased greatly over the past 30 years. Fortunately, we can fix this via public policy.  Taxing capital income when it's realized, rather than when it is reported, would be a good start. Indexing financial assets to inflation would clearly be better than the current favorable treatment of capital gains. Taxing inheritances (depending upon the property tax regime, perhaps, excluding real property) is also an attractive prospect. But an array of policies aimed at broadening gain sharing ought to be considered, including a rethink of corporate governance policies and practices.

The evidence on wealth inequality is less clear-cut. The fact is that by most measures, including financial, wealth (K) has increased relative to income (Y) but is no more unequally distributed in the US now than in the fifties and sixties. Atkinson and Morelli (2014), for example, conclude that wealth was actually more unequally distributed in the U.S during the great compression than now. One might think that increased income inequality would necessarily lead to increased wealth inequality, since wealth is simply the cumulative excess of income over consumption, but that isn’t the case where the distribution of wealth is more unequal than the distribution of income, which is apparently still the case in America.

Even if one uses Piketty’s rather circular wealth estimates, increasing wealth inequality is a phenomenon that applies only to the top 0.1 percent of households (the top 130,000) and a fortiori to the top 0.01 percent (13,000). It would be interesting to see 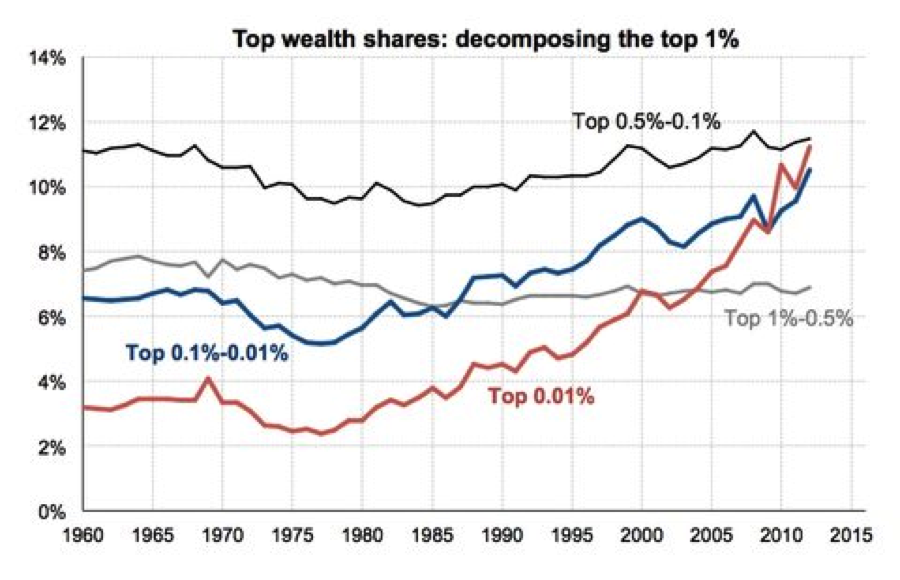 who these folks are. It’s my hunch that a majority of them are business owners not the scions of inherited wealth or their corporate minions. Regardless, it seems unlikely that increased wealth inequality is the main driver of income inequality in the U.S.

Moreover, Piketty’s analysis is concerned entirely with private wealth. It excludes all publicly owned assets, the assets owned by nonprofits, and the present value of future social security and the proceeds from defined pension plans. SSI, for example, is indexed to the CPI, which means, other things equal, it has grown faster than the rest of the country's wealth portfolio. But other things are not equal; the population is rapidly aging further increasing its PV. Apportioning that wealth is difficult, but it probably makes sense to do so.

Finally, there is one further question that you are probably asking yourself if you have gotten this far is “won’t r go down too?” This is obviously a soft point of Piketty’s model and the source of the circularity in his wealth estimates. He summons a lot of historical evidence to show that r has generally been stable during the last two centuries despite massive changes in the K/Y ratio. But that doesn’t mean that he is right and he’s clearly challenging one of the fundamentals of economic theory: decreasing returns to a relatively abundant factor of production.

Clearly, I am not entirely persuaded by Piketty’s every claim. Nevertheless, I was blown away by Piketty’s book. If you want to read something challenging and extremely informative, read this book.
at 8:57 AM

The best analysis of Piketty so far: http://equitablegrowth.org/2014/05/22/honest-broker-mr-piketty-neoclassicists-suggested-interpretation-week-may-17-2014/#more-3102

In a smart comment on the flap over Piketty’s data, Matt O’Brien at the Washington Post’s Wonkblog notes that: Piketty’s alleged errors fall into three categories: 1) transcription mistakes, 2) unexplained data tweaks and 3) in the case of Britain, incorrect data. In fact, every single example cited by the FT (including so-called transcription errors) reflects an explicit choice on Piketty’s part about how to make sense of the (lousy) data available. One may question his interpretations and extrapolations, but they are not obviously wrong. Indeed, most of his decisions about the use of sources and how to adjust them make good sense to me. Moreover, there is really only one place where Piketty’s choices render his big-picture results iffy – the dynamics of the US wealth distribution – not because Piketty makes bad choices but because the underling data are really spotty.

For the U.S., there isn't much of the estate-tax data that Piketty uses elsewhere (what there is seems to show a decline in wealth concentrations as measured by Gini indices). Consequently Piketty must rely on survey data, the Survey of Consumer Finances (SCF), or, like Saez and Zucman, use capital income flows to construct a picture of U.S. wealth inequality. Both seem to show that wealth inequality is increasing (higher than in 1970), although neither is conclusive (indeed, the second approach looks a lot like question begging to me).

Note that some commentators confuse two separate but related issues: how fast is wealth increasing (the wealth-income ratio [W/Y], or B in Piketty’s terms) and is the wealth distribution becoming more unequal (i.e., is the Gini index now higher than it was in the 50s or 60s say)? The second is the question that is still up for grabs, not the first. The ratio of wealth to income is clearly up, which is consistent with the conclusion that the rich (probably) and the super rich (undoubtedly) have on average gotten richer faster than the rest of us. At the same time it is not necessarily the case that the distribution of wealth (which has always been much more unequal than the distribution of income, Gini W > .7 vs Gini Y > .35) has also become more unequal, by some measures, it is becoming less so (from .77 in 1960 to ,72 in 2010 – with a low of about .68 circa 1975).

Very few bloggers confuse income with wealth, but many seem unaware that, for the bottom 99.9 percent of US households, annual income (logY) predicts less than 30 percent of the variation in net wealth (log[W-debt]). Toss some additional variables like age, education, and gender into the analysis and you can boost the R^2 to >50 percent, but that’s about it. IMHO net wealth probably measures permanent income more accurately than annual income, but one thing is sure: they are not the same.