Fred Thompson checks in again with this piece (I should really start calling this the "Fred Thompson Economics Blog). Thanks Fred for keeping this blog alive! 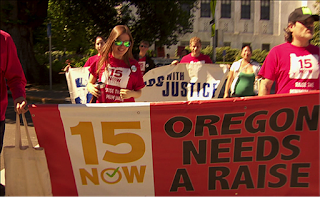 Recently Chuck Sheketoff of the Oregon Center for Public Policy addressed a barrage of questions to the opponents of raising the Oregon minimum wage to $13.50 and, then, $15. Like a good attorney he asked only questions he knew and liked the answers to. Some of the questions he didn’t ask are:

1. Who do minimum wages hurt? Someone pays. Who are the net losers, and by how much?
2. How much do they increase the earnings of lower-wage (<$20 per hour) workers and for how long?
3. Do employers reduce employer benefits or the quality of working conditions when minimums are increased?
4. Do higher minimum wages enhance productivity and, if so, why and how much?
5. Do they attract more qualified/more productive workers into the low-wage labor pool, permitting employers to be more selective and, if so, who gets displaced?

One thing that we know for certain is that the effects of moderate minimum-wage boosts on total low-wage employment, when and where the economy is healthy, are trivially small, maybe non-existent. What happens in the macro-economy, boom or bust, swamps the direct effects of minimum-wage increases. Consequently, Chuck’s claim that “a substantial minimum wage increase can go hand-in-hand with solid economic growth” is undoubtedly true.

Moreover, even the direct employment effects that we have observed from minimum-wage hikes are vanishingly small. Statutory wage minimums work like taxes on low-wage labor, with their proceeds paid directly to low-wage workers and most of their costs shifted forward to consumers in the form of higher prices. This might have two kind of effects on the demand for low-wage labor: an income effect, since consumers wouldn’t be able to afford to buy as many goods and services as before (more or less fully offset in the aggregate by the wage increases), and a substitution effect, as consumers shift away from goods and services whose relative prices have increased as a result. 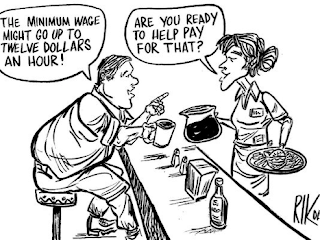 Consequently, moderate increases in the minimum wage should raises the price of some things, e.g., services produced by the hospitality industry, although, in the case of a 30% increase in the minimum wage, probably by less than 3%, and also perhaps cause folks to substitute away from sit-down restaurants, and toward fast-food restaurants. Nevertheless, so far as the food preparation and service industry is concerned, about 80,000 workers, it would be really surprising if the net, one-time reduction in jobs caused by Oregon’s current minimum wage were 1,000, statewide, This is the case primarily because labor costs represent less than 40% of the total cost of sit-down hospitality services and 25% of take-out food service. Moreover, while Oregon’s minimum wage is 27 percent above the national rate, its median wage for food preparation and service occupations is only 5.5 percent higher ($9.60 compared to $9.10 nationwide in 2014). More broadly, the scale of this effect is undoubtedly far higher for food preparation and service occupations than in most other Oregon industries that hire large numbers of minimum wage workers, e.g., retail, where the low-wage, labor-added component is typically ≥ 10%.

There is one industry, however, where one might see an effect, if one is to be found: child-care. The minimum wage is the median hourly wage in the child-care industry in most states. Moreover, wages and salaries account for more than 60% of the cost of service in this industry. Not surprisingly, Oregon, with one of the nation’s highest minimum wages, also has the highest child-care cost in the nation. Oregon has about 15K child-care workers. If Oregon’s current minimum wage has a discernable effect anywhere, it should have one here.

This also points to another consideration often omitted in these discussions: the effects of an increase in the minimum wage, both for good and for ill, depends less on the existing minimum wage than on median wages in low-wage occupations. Oregon’s minimum wage has raised median-wages in food preparation and service occupations about 6% compared to the rest of the country; in child-care, the effect is more like 25%. This is relevant to the chuck’s claim that Oregon has previously made big jumps in our minimum wage previously (42% in 1989 vs. a 43% proposed increase today) without harming the economy. The last time Oregon did so, its state minimum wage was the same as the national minimum; it is now 27% higher. 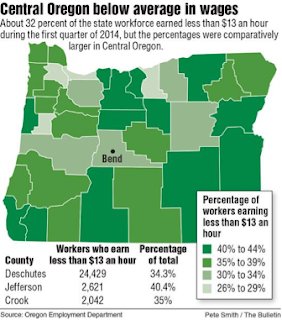 From this standpoint, an increase to $13.50, let alone $15, would at this time be entirely unprecedented. We might end up in a very good place, but we have no real basis for drawing such a conclusion.

Moreover, contrary to Chuck’s claim, the fact is that, over the next couple of years following the 1989 minimum wage boost, Oregon unemployment increased substantially (just as it did in the rest of the US). Eventually, the economy picked up, but ever since, Oregon’s unemployment level has exceeded that of the US, despite faster GDP growth overall. Of course, the 1990-92 recession, not the increase in the minimum wage, caused the fall in employment. But there is some evidence of a possible link between Oregon’s 1989 minimum-wage hike and the persistence of higher levels of unemployment after the recession, i.e., evidence that the timing of minimum wage hikes matters, not just their size.

Some might argue, therefore, that, before taking a leap into the dark, it might be better to see how things work out in Seattle, Los Angeles, and Chicago. But such caution mostly applies to giant leaps. A minimum-wage boost to $13.50 is not really a giant leap: we are talking about a >$2 billion shift in a >$150 billion economy (with the net gain to below-median-income households of $200-$600 million).

Of course, from a welfare standpoint, it is too bad that the attention given to boosting minimum wages isn’t focused on policies that are better targeted at low-income families and the working poor: the preservation and expansion of the social safety net, especially foodstamps, aid to needy families, and unemployment benefits. There is clear, unambiguous evidence that these policies materially improve the welfare of low-income households. Moreover, states that pursue these policies have lower rates of infant mortality, less crime, higher earnings, and better education outcomes. There is even some evidence that these policies are associated with greater social mobility, which is evidently not the case for minimum wage policies.

It’s also too bad that those who are primarily concerned with the working poor don’t concentrate on the expansion of Oregon’s earned income-tax credits (EITC) or on increasing participation of Oregonians in the federal EITC. Unlike minimum wages, these programs target their benefits exclusively to the working poor and are implicitly financed by personal income taxes, which are progressive at both the federal and state level, rather than consumption, which is not. Indeed, the net-gain to low-income Oregonians from boosting participation in EITC to 100% (i.e., if all of those eligible to participate did so) might be as much as half the gain to low-income households from the proposed minimum-wage boost.

Because the most important reason for under-participation in the EITC is the failure to file a tax return, which, as a result of withholding, leads to over collections from low-income taxpayers of up to $200 million per year in Oregon and probably a comparable amount in federal income taxes, we could be talking about net gains to low-income households from fixing EITC participation that are actually larger than those of a minimum-wage boost.

The policies are not inherently rivals (indeed, a good case can be made that they are complements). We could do both; but we probably won’t. In this case the not-so-bad looks like the enemy of the pretty-good. I’m not against increasing the minimum wage, but we could do better.
at 1:19 PM