Fred Thompson checks in with a post on IP28. 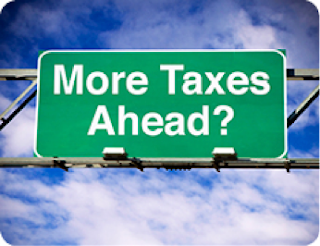 Monday morning (May 23) the Legislative Revenue Office released its report on Initiative Petition 28 – the proposal to levy a 2.5 percent tax on the Oregon sales of C-corporations in excess of $25 million. The LRO report is the closest thing to an authoritative, unbiased assessment of the proposal that we are likely to see. Its big takeaway is that IP28 would increase state revenue by a lot, about $6 billion in the next biennium. So, if you think that Oregon needs a lot more ($3 billion a year) of your (mostly) money for education, health, transportation, and other programs and activities, or, in the alternative, you think the grasping hand of the state is already getting too much of your hard-earned cash and dumping it down various rat-holes, that’s pretty much all you need to know.

If, however, you are concerned about the nuances of tax policy, this report should be of considerable interest, insofar as it addresses a couple of additional questions: who pays, and with what consequences for the growth and economic welfare of the state?

With respect to who pays, the main takeaway is that about 2/3s of IP28’s total tax burden, $2 billion, will be shifted forward to Oregon consumers. This is an amount equal to nearly one percent of all the goods and services produced in the state. As a point of comparison, that would be equivalent to a retail sales tax on goods of about 6 percent, although IP28’s effects would be more uneven and its incidence harder to suss out.

This is so, because the businesses that are responsible for collecting/remitting the tax account for less than 60 percent of the state’s commercial value-added, altogether about 25 percent of total state product. Consequently, one percent across the board implies an average effective burden in the taxed sector of approximately 4 percent. However, the actual burden would vary greatly across final products, with some drugs and packaged foods bearing burdens in excess of 7.5 percent, while most services and products would weigh in at less than one. Not surprisingly, the LRO punted on this issue, spreading the tax hike across the economy like peanut butter.

Who Pays for IP28 (OR Households)? 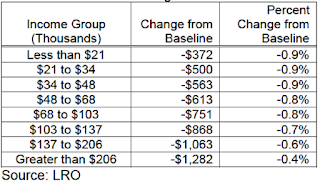 The LRO further argues that most of the remaining 1/3 of the total will be shifted out of state. Remarkably, it estimates that the U.S. Treasury will eat the lion’s share of this remainder, about $700 million, with the balance of the annual burden of IP28 split between capital providers (75-80 percent or >$200 million) and employee wages (20-25 percent, >$40 million). Like the LRO’s estimate of IP28’s dead weight loss (about $.5 billion), given their other assumptions, this estimate of the hit to federal corporate-income-tax receipts seems on the high side to me, but is entirely possible.

Which takes us to the other big takeaway from the LRO report: that the dead weight loss associated with IP28 is nearly $.5 billion per annum and is likely to increase over time, that it will cost 38 thousand private-sector jobs. This is huge – it’s about the number of jobs Oregon’s business workforce added last year. Since the LRO is working with a DGE model, this loss will be almost entirely recouped by increased government sector activities (of presumably equal or greater value?), so arguably, from the standpoint of the economy as a whole, it isn’t a big deal. Nevertheless, it seems hard to square with the notion that, while IP28 will hurt some businesses and help others, its net effect on capital suppliers will be trivial.

Many will say that the LRO report rebuts the claim of the proponents of IP28 that its burden won’t be passed along to consumers or, if passed on to consumers, since the businesses responsible for collecting/remitting the tax are all big national corporations, they will pass 99 percent of the mark-up on to customers out of state.

The second of these hypotheticals is clearly wishful thinking. In the first place, it violates two basic premises of economics: that businesses maximize free cash (after tax and interest) flows and that cross subsidization is contrary to profit maximization. Maybe these reasons are convincing only to economists, but they work fine for me. More persuasively, perhaps, this hypothetical is flatly contradicted by commonplace fact. Businesses everywhere add retail sales taxes and excises (like cigarette and gas taxes) to their prices, which vary accordingly from state to state. Where value-added taxes exist, businesses incorporate them directly into their prices, and, where jurisdictions levy different rates, as in Europe and Canada, prices reflect those differences. It is even the case that prices in Washington State vary according to their B&O Tax rates, the closest analog I know of to IP28.

The first hypothetical is trickier. The LRO doesn’t really show that most of the burden of IP28 will be shifted forward to final consumers; it simply assumes that, because it is a fairly broad-based tax on sales, that’s how it will behave. I sympathize: IP28 is sui generis – we have absolutely no experience with a tax exactly like IP28, from which we could extrapolate likely outcomes. None! In no other country, in no previous time. As I noted, the best analog to IP28 is probably Washington’s B&O tax; IMHO the LRO worked from the next best analog, Ohio’s gross receipts tax, owing to the availability of recent data.

The problem is that this may not be good enough. Big businesses have a lot of expertise when it comes to managing costs. They deal with cost increases like IP28’s all the time. What this means is that they find ways to avoid or mitigate costs, pass them on to others, customers or employees, or, if the business is worth it, and they cannot avoid the costs or shift them to others, eat them, but there is no guarantee that their Oregon business will be worth it, especially where low-margin, high-turnover businesses are concerned.

Nevertheless, if businesses cannot avoid the tax by means of smoke and mirrors or pass it on to their customers, as the LRO presumes, the real economic effects of IP28 will probably be bigger than predicted, and mostly negative; the revenue increase from IP28 could also be substantially smaller – i.e., more pain, less gain.

I am a cautious guy. I don’t like giant leaps into the dark, which is what IP28 is. Moreover, Oregon is already running one big policy experiment, the minimum-wage boost, which could interact with IP28 in a variety of ways, mostly adversely.  Of course, as Paul Warner, the head of the LRO, reminds us, state tax policy rarely if ever outweighs the main determinants of economic performance – the business cycle, exchange rates, productivity growth, etc. All true. So, maybe, my anxiety is misplaced. But some states – Kansas, Wisconsin, Oklahoma, Michigan – have experimented with big tax changes and managed, as a consequence, to shoot themselves in the foot.

There are smart ways to boost state revenue: eliminate the PIT kicker, enact a carbon tax, broaden the weight-use-mile tax to comprehend passenger cars, adopt a real gross receipts tax (treating it as an alternative minimum tax for C-corporations) or a value-added tax, etc. This is not one of them. Besides, Oregon’s economy has performed relatively well over the past quarter century, much better on average than the rest of the U.S. Why tempt fate?
at 9:02 AM

Jim, see my first paragraph. I was reporting on the LRO report, which was agnostic as to the economic benefits of state spending, aside from its direct effect on the input-output relations used in the ITEP model. The PSU analysis done for the supporters of IP-28 (M97) got a much more positive result employing a dynamic scoring model: its estimates imply a local income multiplier for government spending between 1.7 and 2, and a cost per job of $30,000 per year, which actually puts IP-28 ahead of the game..

Thanks. I find it hard to believe that the cost of a state job is only $30,000 a year. At $13 an hour the cost would exceed $30,000 a year ( $13 an hour is really a cost to the employer of $13.98 since they have to pay SS $13.98 X 2,280 (the hours the IRS considers a full-time worker works per year)-> $31,874. Being full time it is likely there are health insurance benefits and retirement benefits. Thus bringing the cost well above $30,000. In addition, for every "line" worker there is overhead in the form of managers and HR etc. As for the Keynesian multiplier, that is a stretch. I feel when PSU says "dynamic" it means we will fiddle with the parameters and assumptions to get the result we want.

Jim, I hear what you are saying. A lot of folks are skeptical of DGE models for those reasons. But, I evidently failed to male one point clear, the $30k figure is a product, what it costs to generate a job given an income multiplier for government spending between 1.7 and 2, the median incremental direct cost of employment is about $56K, which as you correctly note is a lot more than $30k, 1.7 t0 2 times more.

Fred,
Thanks for the clarification. I had not thought of it that way. I hate to be a bit pedantic but they are still failing to take into account the cost of employee benefits. State employees have a rich medical plan for example. If they were not exempt it would fall into the Cadillac tax plan under the ACA. Plus the 7.5% tax the employer pays for Social Security. The cost of medical, dental, vision, disability, sick days, vacation, and life insurance could easily run another $15,000 a year for a $50,000 a year employee. (medical being the largest cost; and I do not begrudge any of those benefits to state workers ) I really think they massaged the numbers to come up with the "results" they wanted.

LRO uses a Computable General Equilibrium (CGE) model adapted from CA's; PSU a commercial product. I know that the LRO didn't massage their numbers to get a preferred result; I don't think PSU did either, otherwise they wouldn't have been at sixes and sevens with Our Oregon, who really didn't like their results. My point was merely that estimating the DW losses of this proposal is a craps shoot.