Beeronomics: Why No New Bottling Breweries in Oregon? 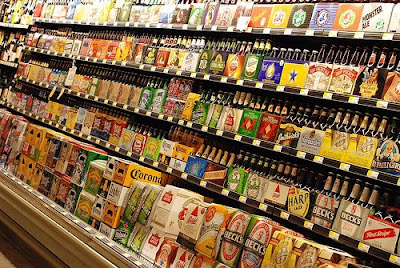 It is finally time to get back to something I mentioned in an earlier Beeronomics post and something that was posed to me as a bit of a puzzle by Full Sail's John Harris: why are there no major new entrants into the craft brewing industry in Oregon? Think about the big players: Deschutes, Bridgeport, Full Sail, Widmer, MacTarnahans, Rogue...these have all been around for at least 15 years (I think). So why was there a sudden burst of new breweries and then ... nothing? (NB: I am aware of Caldera, Terminal Gravity and the fact that many smaller places get some 22oz bottles out - but I am thinking only of larger brewers).

I don't know the exact answer obviously, but I can think of a few economic theories that could help explain the phenomenon.

The first is the relatively high fixed cost of starting a brewery the scale of Deschutes, Full Sail, Bridgeport, etc. This takes a sizable investment and the investment won't be made if the size of the market new brewers can carve out for themselves is small. This is in contrast to an industry where fixed costs are very low (blogging for example) and even a very tiny market is enough to justify the small cost.

[By the way, this makes Ninkasi's strategy very intelligent. By starting as a distributing brewery in kegs only, apparently they can distribute themselves, now that they have established a reputation, grabbing market share with bottles should be a bit easier. Plus the overhead is a lot lower in kegs than in bottles (save for the kegs themselves, which are becoming more and more valuable as scrap metal). ]

The third is the fact that beer is an 'experience good' (something I have mentioned before) which means that people have to actually consume it to tell how good it is. Thus the purchase if an unknown beer carries risk for the consumer and, in general, people avoid risk.

Finally, entry deterrence by established breweries probably plays a role. This has been found in the behavior of the macrobreweries, but might also be true with the littler ones as well. To prevent new entrants, established breweries can do a number of things. They can lower price when a new entrant arrives and even take a short term loss to try and prevent the establishment of a long term competitor. They can also increase capacity more than is necessary. This can be an entry deterrent because it means that a brewery can increase output with no fixed cost whereas a new entrant would have to incur a fixed cost to enter, thus the excess capacity is a commitment device that signals it will compete fiercely against a new entrant.

To sum up then, the first breweries each got a significant market share of a relatively untapped market (a first-mover advantage perhaps), but subsequent breweries have to face high fixed costs, constraints on outlets, struggles of getting customers to try their beer and possibly strategic behavior by other breweries.

I think these theories can also help explain the explosion of brewpubs rather than distributing breweries. Yes, fixed costs are high, but you create your own sales outlet and are competing not just on beer alone, but location, food, atmosphere, etc.

I recently read that a few years ago, Deschutes brewery spent millions to establish a bigger presence in the Colorado and California marketplaces, without any ultimate success. Perhaps some entry deterrence was at play in those markets, which have their own major brewers.

But, then again, are the Oregon beers really as good as the best from California and Colorado? I'd bet that a lot of their popularity here comes from the fact that they're local, as opposed to superiority in taste....

Widmer also started out with only kegs and then grew into bottling - I believe they started bottling around 1996? Also, wasn't it just around 15 years ago that people started looking for, drinking and caring about micros? I've only been a legal drinker for 10 years but that seems about right to me as far as when micros caught on. So, maybe it's just a mature market now and, therefore, much harder to break into. There's certainly A LOT more choices out now than there were 10 years ago!

Yes, I think that the early brewers created their own demand by slowly teaching people what good beer tastes like. I think the market is still growing quite a bit, the question is, are new brewers going to fulfill the new demand or are the old brewers going to expand? The history of the rise of the macro-breweries suggests the latter.

I was recently told by John Harris that Flying Dog in Denver shut down its brewery and is now brewed (or contract brewed) in Maryland. So shake outs are still happening.

Jeff, it pains me to hear you talk about Oregon beers so dismissively. California brews give Oregon a run for their money, but Colorado? Why do you think I moved back to Oregon from Denver. When my local store stopped stocking Full Sail it was clearly time to leave...

The answer is, IMHO, that over all Oregon beers are the best in the US, hands down.