Cornell Going to the Big Dance! 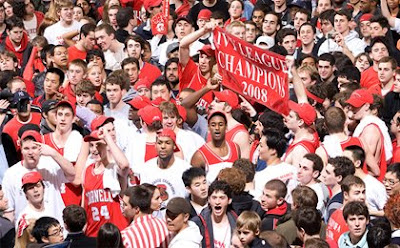 Okay, so I could not resist posting about the Cornell University Men's Basketball Team's first trip to the NCAA Basketball Tournament in 20 years, but contrary to what you might think this does have something to do with both Oregon and economics. First, the Big Red are led by Oregon's own Jason Hartford from Tillamook and second, since the Ivy League does not award athletic scholarships (wink, wink) the economics are such that they are excluded from every other big time athletics event (unless you count the Frozen Four). So this is really the only chance teams from the Ivy League get to perform on a national stage and get media attention - especially if they pull off the miracle upset like Princeton over UCLA in 1996.

You are probably saying to yourself, who cares?, the Ivy League is elitist and snobby and all that. That is definitely true of all the other Ivys, but Cornell is cool: it is the land-grant institution of the state of New York and a mix of public and private colleges. Many of the undergrads at Cornell are working-class New Yorkers who get in-state tuition in what must be the best deal in higher education in America. It is definitely neither elitist nor snobby. So go Big Red!
at 7:55 AM

but contrary to what you might think this does have something to do with both Oregon and economics.

That was a deft misdirection. But I am wise to your ways and can identify the omitted fact that will fully explain this post: boosterism. You're a proud alumnus.