Beeronomics: What's Up at BridgePort and Rogue? 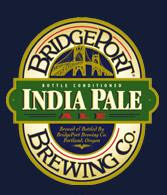 Word on the street is that BridgePort, the godfather of Oregon craft brewers, is faltering. In a time where almost all craft brewers are seeing double digit growth in sales, Bridgeport is going backward. I have no way to confirm or disprove this but, if true, it is surprising for a company with such a storied history and strong brand identity. Bridgeport's IPA is, probably, the quintessential NW IPA. They are fully invested in the latest trend of brewing special brews and those brews, like the new Hop Czar, are often excellent. They also have a signature brew pub in the newly trendy Pearl. All brushed aluminum and gleaming timber. Unfortunately for those of us who used to frequent the BridgePort when it was all brick and odd little nooks and crannies in the then still quite ragged Pearl, the new brewpub seems sterile and uninviting. 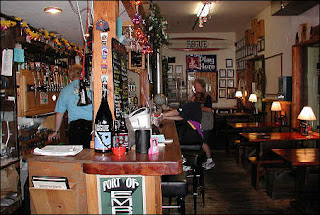 I wonder if this has rubbed off on the brand. For whatever reason the bloom seems to be off the rose.

Contrast this with the thriving Rogue Brewery. I was in Newport over the weekend with the in-laws and my father-on-law, who arrived first, called up from the grocery store to ask what beer to buy. When in Newport, get Rogue, said I. Later, with a sixer of Dead Guy in hang, he was amazed at the price: "I have never in my life pain $11 for a six pack of beer, how can they possibility sell any beer at that price?" It was a very good question. Rogue is always the most expensive beer in my local grocery, and yet they thrive. I told my father-in-law that they have a loyal following and a strong brand identity, but that felt a little hollow even to me. I rarely buy Dead Guy, it is good, but there are almost always just as good beers for two to three dollars less. Over the weekend I lunched at the restaurant in the brewery. It is a decidedly low key place, especially compared to the BridgePort. Plywood and unfinished surfaces, wobbly tables and no decor. And yet they charge $15 for a hamburger and had a line out the door of people waiting to get in. Go figure. The food, by the way, was good, and the beer was exceptional. I brought home a bottle of Juniper Pale Ale and blew the father-in-law away.

Rogue seems to play by its own rules, and for whatever reason almost everything it touches, turns to gold. My impression of owner Jack Joyce is that he doesn't care to think too much about it, but rather go with his gut. He is also not really interested in going for the big selling high-volume beer. And even they have had some misfires: remember the short-lived packages with historic photos of fishermen and such? No? I got your back.

But in all of this remains a mystery of the business. How do you stay fresh and relevant in consumers eyes? Jack Joyce does it by following his inner muse. BridgePort seems to be trying to listen to its inner MBA. The former is not always a good idea - many a good brewery has been lost to those not very business savvy. And the latter is not always bad. Full Sail's regrettable new packaging, session beer and slogan "Brewed to Stoke, Stoked to Brew" seems to have worked out very well.

Economics has lots of theories of branding, advertising, consumer preference and the like, but when it comes to trends, fads and the like. We are just as in the dark as everyone else. So, ideas?
at 11:23 PM

There's also word on the street that specialty grocers like Whole Foods have started doing poorly. My two cents? It's the economy -- or at least people's perception of it.

There is some econ term from 201, which for the life of me I cannot remember, which says you differentiate a product and demand actually goes up while price increases... for a small bit.

This is what is happening with Rogue. In the brewpub you can't get a pitcher anymore... the beer is over $10 plus for a 6 pack, and yet people readily grab it up for the perceived quality. (don't get me wrong, fresh tap Rogue beers are generally good, but at that price point 'good', I am not so sure).

Rogue is an image... a culture of 'craft rebelliousness' yet slowly it is becoming more mainstream (no more 'yellow snow' name for instance). Jack is of all things a great marketer, and he saw an opportunity with Morimoto. An opportunity with Kobe beef. So, you pay through the nose for each Rogue product. Yet he drinks bud - all the while, importantly, he trusts his brewer to keep the beers sexy. So they are treats for the consumer and grows the brand... but they are not everyday beers for most. And its been a long time since Bridgeport was sexy. Once Rogue gets seen as mainstream upscale, it will have its falter as well.

Locals, such as myself, have already moved out to more low key brewers (Siletz for example)... the quality is there, and I can actually have a couple beers and have change from a $10 (or actually tip the pourer).

Alternatively, I picked up a keg for the kegerator of Kona's passionfruit wheat (Kona Wailua Wheat) which I fell in love with at the '07 brewfest, and this month my pints are less than $1.00 each.

Don't trust Jack's muse... don't trust the consumers... quality or history is not an assurance of preference by any means. We tend to like things we think we should... and your Juniper Pale... its the old Yellow Snow... stupid name change, same beer... and I just can't get visitors as excited by it anymore.

Bridgeport IPA is one of my favorite beers, period, and a regular visitor in my kegerator. That said, the rest of their mainstream beers are only OK, and that is probably hurting them at their volume. That is an interesting discussion - can a brewer be successful long-term with one or two high-volume brews and a stable of small crafts? Or will there be little middle ground for Bridgeports and Widmers in the long run?