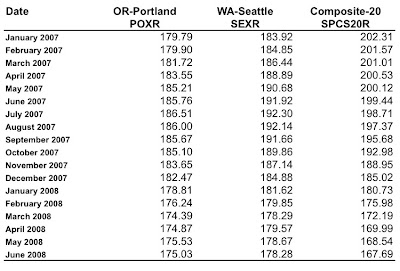 Here are the latest Case-Shiller numbers through June of 2008 for Portland, Seattle and the 20 city composite.  The story for Portland and Seattle is similar, a considerable softening has happened but we are still not seeing the continued decline as seen elsewhere.  There is a lot of speculation that we are just 'behind' the nation and will eventually get there.  But as I have stated before the fact that we were 'behind' at the beginning meant that we did not see the kind of home price inflation of California, for example.  So I do not expect that the 'correction' to be as severe.  However, there are a number of worrying signs.  The number of delinquent loans and foreclosures are going up rapidly in Oregon apparently.  The health of major financial institutions is also a worry right now, as is the Fed's ability to do much more to help ease the credit crunch. 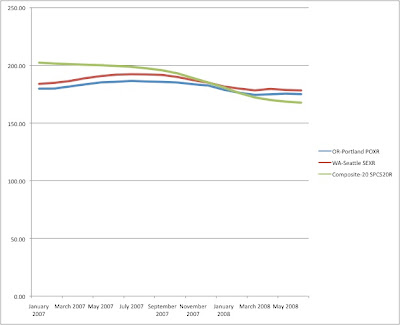 We also learn today that consumer confidence is up, surprisingly, perhaps as oil prices retreated a bit.  But inflation is a concern and wages are not keeping up.  To me this all points to prolonged malaise in the US economy - I don't see it getting better until well into 2009.  As for Portland housing market.  If I were to guess, I would expect that prices will fall again int he winter, but not by that much and then, next spring we will start to see a recovery.
As for my field experiment - I have collected new data, but I shall report on this later once a resolution has been reached.
at 9:30 AM

Recovery? Might be a bit early for that. Given the ongoing credit contraction, it is hard to imagine PDX home prices stabilizing until the median price:income ratio approaches a more realistic level.