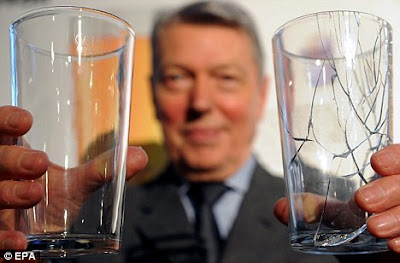 Time to return to the beeronomics gig. Perhaps you have heard of the new pint glass technology in the UK that prevents them from shattering. The idea being that this will reduce the incidence of serious injury from drunken fights. And if you have ever been in London (prior to the change in the law in 2006) at the 11pm closing time for bars, you know just how violent and ridiculous bedrunken Brits are as they spill on to the street with bellies full of beer and nothing to do for the remaining hours of the night. The new glassware technology may help avoid some of the more serious lacerations but will it help reduce drunken violence?
I am not sure. For many years I have had a theory about this which I first developed in a conversation with my British cousin. By cosmic chance we both happened to attend graduate school at Cornell at the same time and he was the absolutely stereotypical upper class Brit (he is Welsh he would want me to make clear), right down to his first in physics from Oxford and love of long walks in the woods. Anyway, he lamented the gun culture in the US and I said that it may be true that we have a problem with gun violence but based on personal observation, the US had a much smaller problem with casual violence than did the UK. My theory was that it was guns that made the difference.
The idea is essentially a game theory idea: the prevalence of guns in the US make the probability that any violent confrontation may turn lethal much greater in the US than in the UK - in other words the stakes are much higher in the US. So you don't engage in casual violence nearly as readily.
Here is a normal form game representation of what I am talking about:

In the UK, if drunken posturing occurs and the choices are to fight or walk away (run perhaps?), the payoffs might be something like the above. Walking away invites social opprobrium so it is particularly bad if you are the only one to do it: you get a payoff of negative 50 and the opponent gets 0. If both of you walk away then the stigma is attached to both but not so bad: negative 5 for each. If you fight I will assume you both get hurt, but nothing so bad that a little ice and time won't fix: negative 10 for each. Note that I have designed this as a prisoner's dilemma game where fighting will take place even though it is a second best.
Now let's consider what the game might look like in the US where guns are common.

The only difference here is that now the expected payoff to fighting is much worse because of the possibility of guns leading to hospitalization or death. Notice that the Nash equilibrium is now not to fight (and it is Pareto efficient). So the threat of death that guns provide actually prevents the engaging in violence in the first place.
A DISCLAIMER: This is all in fun - I know that this is a lot like gun advocates' claim that guns lower crime, a claim that has been shown to be false by serious study. But it is possible that in this context, the presence of lethal weapons lowers the incidence of minor violence between two willing parties.
So what will the new glassware do? It may in fact encourage more fighting by lowering the stakes. Now that you don't have to worry about getting seriously cut, why not engage in a little of the ultraviolence?
Time will tell...
at 10:00 AM

fight in the US = assault charges and annoying costs of lawyer.

Fight in the UK = cop laughing as you, bloodied, describe that all you said to provoke the brawl was that warm beer sucks. Then, if you can walk away, they do as well.

Thus, drink with smaller blokes across the pond.