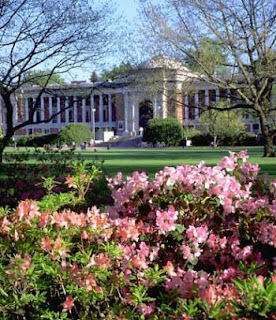 The Oregonian reports today on a new survey that shows that Americans are becoming more are more skeptical that colleges and universities are "cost-effective and doing all they can to keep tuition affordable."

Unfortunately, this skepticism starts to make Americans question the wisdom of investing in a college degree at the very time that the rewards have never been greater. Given my recent post on agglomeration externalities, this is a troubling trend as individuals personal education decisions affect the overall prosperity of the communities in which they reside.

Part of the problem is the failure of economists to explain the phenomenon of cost disease.  And part of the reason for this failure is that it is a hard concept to explain (as I found out last night at the end of four straight hours of teaching and trying to explain the concept off the cuff).

You see, the cost of a university education rising faster than inflation is not evidence of profligacy on the part of administrators, but a natural byproduct of the fact that the production of knowledge is not terribly more efficient today than 100 or 200 years ago.  And this makes universities among a minority of industries where productivity gains have been very slow.  What this means is that in order to maintain a staff of professors they have to compete with industries that have seen vast productivity gains over the years and so salaries (which account for most of the cost of delivering a university education) have risen as well.

This idea was first proposed by William Baumol, who called it cost disease, and in the original telling he used an example of musicians performing a Mozart concerto as a classic case of an industry that is absolutely no more productive than hundreds of years ago.

James Surowiecki in The New Yorker a few years back had a very nice explanation that incorporates the musician example:

...And then there’s college: tuitions at private colleges have jumped 5.6 per cent annually over the past three years, according to the College Board, and public colleges are even worse. In times like these, it’s hard to get worked up about deflation.

Why the divergence? It may have something to do with Mozart. When Mozart composed his String Quintet in G Minor (K. 516), in 1787, you needed five people to perform it—two violinists, two violists, and a cellist. Today, you still need five people, and, unless they play really fast, they take about as long to perform it as musicians did two centuries ago. So much for progress.

An economist would say that the productivity of classical musicians has not improved over time, and in this regard the musicians aren’t alone. In a number of industries, workers produce about as much per hour as they did a decade or two ago. The average college professor can’t grade papers or give lectures any faster today than he did in the early nineties. It takes a waiter just as long to serve a meal, and a car-repair guy just as long to fix a radiator hose.

The rest of the American economy functions differently. In most businesses, workers are continually getting more productive and can produce a lot more per hour than they could ten or twenty years ago. In 1979, workers at G.M. needed forty-one hours to assemble a car. Today, they need just twenty-four. In the nineties, according to the consulting firm McKinsey & Company, retailers boosted their sales per hour by sixty per cent, and that was nothing compared with computer makers, whose productivity since 1995 has gone up sixty per cent each year. Because companies are producing more for less, they can hold down costs, and when times are good they can raise wages without hiking prices. So, in the late nineties, as productivity rose, wages did, too, though inflation lay dormant.

Generally, productivity growth is a boon, but it creates problems for non-productive enterprises like classical music, education, and car repair: to keep luring talent, they have to increase wages, or else people eventually migrate to businesses that pay better. Instead of becoming nurses or mechanics, they become telecom engineers or machinists. That’s why teachers are getting paid a lot more than they were twenty years ago. (The average salary for an associate college professor has risen almost seventy per cent since the early eighties, and that’s if you adjust for inflation.) To pay those wages, schools and hospitals have to raise prices. The result is that in industries where productivity is flat costs and prices keep going up. Economists call this phenomenon “Baumol’s cost disease,” after William Baumol, the N.Y.U. economist who first made the diagnosis, using the Mozart analogy, in the sixties. As anyone with kids knows, cost disease is alive and well. A recent study by the economists Jack Triplett and Barry Bosworth demonstrates that among the service businesses that have been least productive in recent years you’ll find education, insurance, health care, and entertainment. These are the ones that have seen steep price hikes.

Cost disease isn’t anyone’s fault. (That’s why it’s called a disease.) It’s just endemic to businesses that are labor-intensive. Colleges, for example, could do many things more efficiently, but, since their biggest expense is labor, the only way to reduce costs is either to increase the number of students each professor teaches or to outsource the work to poorly paid adjuncts. The same goes for health care: you can control drug costs and limit expensive new procedures, but, when it comes to, say, hospital care and doctor visits, the only way to improve productivity is to shrink the size of the staff and have doctors spend less time with patients (or treat several patients at once). Thus the Hobson’s choice: to lower prices you have to lower quality.

Once upon a time, economists worried that cost disease would wreck the economy, as services started to eat up more and more of people’s budgets. But the evidence now suggests that it can be contained. As long as the productive industries keep growing quickly enough to offset the sluggards, the economy as a whole can stay in good shape. The most significant consequence of Baumol’s cost disease, in fact, may be political, rather than economic. Some of the most important services that the government provides—education, law enforcement, health care—are the hardest to make more productive. To keep providing the same quality of services, then, government has to get more expensive. People pay more in taxes and don’t get more in return, which makes it look as though the public sector, at least compared with the private sector, is inept and bloated. But it could be that the government is merely stuck in inherently low-productivity-growth businesses. It’s not inefficient. It’s just got a bad case of Baumol’s.

Which is the point. Yes, college is more expensive in that you have to give up more and better consumption goods to get it. But overall consumption and standard of living has gone up as well, so we are still better off. And the rewards to a college education in the adult labor market and very large and growing, so it is still, despite the cost increases, a good deal.

And, as a bonus, here is a nice application of cost disease to healthcare from The New York Times.
at 8:30 AM

I'd throw a couple other elements into the mix. One problem with public surveys is that they poll people who aren't versed on the issues contained in the poll. Half of Americans have had "some college," but only a quarter have a bachelor's degree. Asking the 50-75% about their opinions on higher ed is going to produce uninformed answers. This is an important data point for politicians who have to worry about selling popular policy, but not much else.

The second factor is that colleges aren't static. They do spend more money on a variety of areas beyond education and research: administrations are ballooning; colleges are catering more to the "experience" of the student by offering more on-campus amenities; many schools invest in various status-seeking symbols that may not enhance education (award-winning architectural buildings, museums, etc.).

These may only increase costs marginally, but they do affect the bottom line. Ironically, many of these added expenses are exactly the kind of thing you'd expect in universities who regard students as customers and are attempting to behave like businesses.

On the first point, knowing what non-experienced people think is actually critical. From an economic growth point of view we want people to understand that a college degress is an excellent investment even at current prices, because all of our prosperity depends on it.

On the second point, at the top I think there is a facitlities arms-race, particularly among elite private schools who are competing of the best students. But at the state level, most fancy builings of this type are privately funded (or are largely privately funded), the new UO arena for example.

I can tell you (as I shiver in my underheated and under insulated office) that most facilities at OSU at least are not fancy.

On the first point, I guess it can be valuable, but only in certain cases. I certainly defer to you about whether it's valuable to economists. It's not valuable to politicians, save to say that it will incline them to follow the mob about policies of which the mob is ignorant--or so it seems to me. (Republicans are currently using polling data to try to kill health care.)

As to the second point, I think you're wrong. In my work as a bargainer with AAUP, we had a fair amount of information about campus upgrades designed solely to appeal to the "customers"--the students. These amenities were designed to lure students to PSU, not to facilitate their education. Where the school scrimped was professor salaries and certain facilities--like professor offices. Which, it seems, students don't much care about.