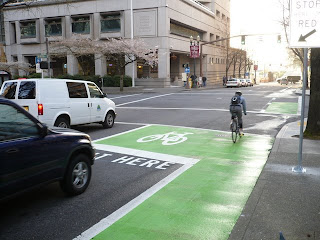 From the Oregonian's Joseph Rose's Twitter feed (@pdxcommute) I was alerted to this interesting missive about bike boxes from England.  It starts with a brief description of a truck (lorry) on bike accident that is all too fmiliar: a biker in the bike lane going straight and a truck in front slowing to turn right (or in this case left as the Brits are all crazy and drive on the wrong side of the road). Here is a quote from the London Evening Standard:


Mr Moore had been riding on a cycle lane on the inside of queueing traffic and drew level with the tanker’s front axle virtually as it began pulling away. He tried to cycle straight on but was hit by the lorry - which had stopped in the advance cyclist’s “box” - as it turned.

PC Austin said the Highway Code made clear that Mr Moore had the right of way. “Had he [the driver] looked in his mirrors as Mr Moore cycled up, it’s very clear he would have been visible. He is utilising the cycle lane as is right and just.”

But under cross examination from Mr Gummer’s barrister Alexis Dite, PC Austin admitted: “It would have been a pertinent move, as a cyclist coming down the inside of a large goods vehicle, to show some level of caution.”

… Mr Gummer, who has more than 30 years’ experience as a HGV driver and a clean licence, was found not guilty of careless driving after insisting he had checked his mirrors before pulling away. The CCTV images showed he was indicating left as he waited at the lights.

The author of the blog argues that bike boxes are ineffective because the reality on England's small urban streets is that congestion effectively causes them to be ignored.  Though I am not sure that in the case above the bike box matters at all as the light had already changes and the lorry had commenced its left turn - so the queuing purpose of the box was obviated.  The author then goes on to argue that more needs to be don to protect bikers and mentions a Dutch solution:

This seems a pretty good solution but it still has a flaw - the cyclists themselves.  Which is what concerns me about all the efforts to provide more safety for bikes.  Bike boxes, green painted lanes, additional signage can give a false sense of security to bikes.  As in the above incident, a prudent biker would not assume the truck can see them and would slow down.  Cars do this all the time, it is a basic principle of defensive driving: never assume the other cars see you, anticipate you, etc.  In economics terms these lower the perceived cost of asserting ones rights as a biker more than the lower the actual cost.  It is a false sense of security.

In the case above, bikers would still face a similar problem, if they come up upon a right turning car from behind, the car has to identify them and bikers should never assume this is the case.  Also, bikers wishing to turn left have to wait for the next light change - an extra level of patience often not found in urban cyclists.

Which is all to say that I don't understand why we expect engineering to solve all of these problems.  I believe in infrastructure dedicated to bikes but, as in so many other aspects of life, education and public awareness might yield a higher marginal return on the same money spent.  I would guess that almost all drivers and cyclists would fail a test on the basics of the Oregon code that governs bikes in roadways, for example.  We make drivers learn and pass a test before setting them free, but do nothing similar for bikers nor stress the biker-car interface in the Oregon driving manual or test.  Doing something as including bikes in the Oregon drivers test and a public awareness campaign about defensive biking and good biking behavior might do a lot more than gallons of green paint.
at 9:04 AM

Email ThisBlogThis!Share to TwitterShare to FacebookShare to Pinterest
Labels: Bike-o-nomics

It isn't just defensive driving, it's about predictability. Auto traffic couldn't function if drivers didn't generally behave in predictable ways, and they're supplemented with all kinds of signaling technology (brake lights, turn signals, reverse lights, horn) to communicate their intent. Biking in contrast is a bunch of hand waving.

If Portland is serious about increasing biking's mode share that has to change.

Your argument is good, but I don't think that means the bike boxes are a bad idea. One of the ideas for the bike box is to encourage more people to bike by changing the environment to give them a sense of safety about being on the road. As such, your argument is kind of right on... Planners who want to encourage people to bike by making it feel more comfortable/safer must do so in a way that does not make bikers less vigilant.

If we are serious about making a big shift towards cycling as a mode choice (as Portland is trying to do) then of course you're right about needing to see the value in the public education campaign. That makes me think of how the Chinese are now shifting towards driving and in this transition everyone is sort of collectively learning the hard way how to interact with other drivers on the road. Education would helped, especially for the cab drivers...