Fred Thompson once again keeps the blog alive with another insightful piece.

Patrick Emerson and I have written about the Kicker and its folly often here at the Oregon Economics Blog. In what is otherwise an arguably exemplary state and local tax system, Oregon’s kicker is an embarrassment, or, more correctly, the legislature’s unwillingness to deal with it is simply shameful. 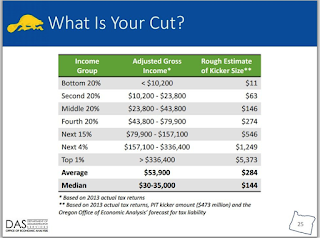 As it happens the kicker isn’t entirely unique to Oregon. At least six other states – Colorado, Massachusetts, Missouri, New Hampshire, North Carolina and Oklahoma – have “triggers” that automatically impose tax cuts (i.e., give refunds, credits or a reduction in rates to taxpayers or businesses) whenever cash inflows (real or expected) exceed planned outflows. Moreover, Michigan’s Governor, Rick Snyder, recently signed a bill that will automatically roll back personal income-tax rates whenever state revenue exceeds 1.425 times the rate of inflation, although not until 2023.

All of these measures have a similar justification: the widespread belief that governments are myopically imprudent, that when times are flush they will spend like drunken sailors, thereby creating irresistible pressures to raise taxes when times are tight to maintain otherwise unsustainable current service levels. Moreover, automatic cuts are apparently politically appealing. They promise tax cuts for voters, but grant them only when there is enough cash to pay for the cut. 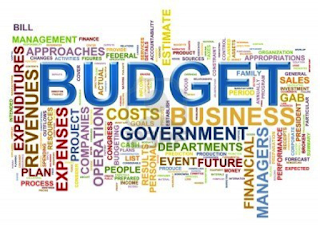 From this standpoint, Oregon’s kicker could be worse. It goes into effect retrospectively, when actual cash inflows exceed the budget forecast. In Oklahoma, the kicker is prospective, based on the revenue forecast itself. This year Oklahomans, like Oregonians, will get a big refund. Unfortunately, forecasts are not reality. Oklahoma’s actual revenues are insufficient to cover both its budget and the automatic tax cut. Moreover, Oklahoma has a very strict balanced-budget law. It must bring its cash outflows into line with inflows during the current year and it is prohibited from borrowing (even from itself) to do so. In this instance, the automatic trigger caused precisely the problem it was supposed to fix.

Economies are cyclical; revenues are too. That’s not necessarily a bug. The problem is stabilizing spending, but, as the Legislative Task Force on Restructuring Revenue and Governor Ted Kulongoski’s reset team recognized, the solution is straightforward: avoid myopic imprudence, i.e., grow spending at a sustainable rate, using saving and, when necessary, borrowing, to smooth out spending. Were the legislature less pusillanimous, repeal of the kicker law would allow this solution to be put into effect without a foreseeable need for borrowing (actually, given my druthers, I would base the revenue estimate on a sustainable, long-term growth rate, use the kicker – revenues in excess of the estimate – to automatically pay down state debt/build a sinking fund, and rely on borrowing whenever actual revenues dropped below the revenue estimate, but that is a slightly different story). 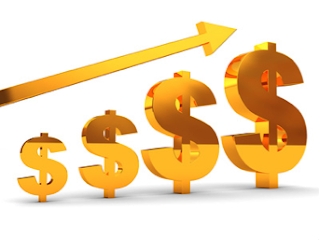 It might be noted that other states have found the political cojones to repeal automatic triggers. According to Governing Magazine, the trigger trend began in California, but was laid to rest during the Schwarzenegger administration. More recently, thanks to their Governor Brown, California voted Proposition 2 into law. Proposition 2 amends the California Constitution to require that the Governor make mid-term spending and revenue targets part of the state budget process, requires the state to set aside revenues each year – for 15 years – to pay down specified state liabilities, and substantially revises the rules governing the state’s rainy day fund. In other words, California’s legislature did pretty much what Oregon’s has consistently refused to do. They referred a measure aimed at making state and local spending sustainable to the citizenry. On November 4, 2014, 70 percent of the electorate voted in its favor. It is downright shocking when California exhibits greater fiscal responsibility than Oregon.
at 11:50 AM

The Tax Foundation of tax triggers (including the OR's kicker). http://taxfoundation.org/article/designing-tax-triggers-lessons-states?mc_cid=be351c2add&mc_eid=695bdd8064