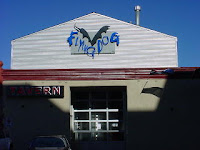 There is a feisty exchange in the beer-o-sphere (the beer blog-o-sphere) concerning a recent article in Time magazine that claims Denver bests Portland in brewery tourism (sacrilege!). This is, of course, patently absurd - and I speak as someone who recently spent 6 years in Denver. But the author (who claims not to like beer - so that explains a lot) does raise an interesting economic conundrum: he claims that Denver is better for his purposes, because, unlike many Portland breweries more Denver breweries bottle and sell in retail outlets far and wide (and so he can later find the beer he likes in a store at home). So, why are there more Colorado breweries bottling relative to brewpubs than in Oregon? First, is this really true? A quick search through my mental archives confirms this. I can think immediately of bottling craft brewers Great Divide, Flying Dog (since moved brewing to Maryland), Avery, Left Hand, Breckenridge, Boulder, New Belgium, Odell, Bristol in Colorado while I can think of only Wynkoop and Bull and Bush as non-chain brewpubs (in Denver).

A few weeks ago I blogged about a related conundrum: why have essentially no new bottling breweries in Oregon opened up in the last 15 years? This is similar: why so many bottling breweries as opposed to brewpubs in Colorado compared to Oregon?

I have a few initial thoughts

-First, tastes and culture: I don't think Colorado (filled with transplants from the plains states) has developed a very sophisticated beer palate yet. So I think many of the breweries are business-plan first operations, designed to make money and serve what the customer wants while selling the Colorado image as part of the beer (don't know what I mean? Compare Rogue to Breckenridge - I rest my case). I find many of the beers virtually indistingusihable from macro-brews (perhaps with slightly more malt and hops). This is, of course, self-reinforcing as palates do not evolve - so customers don't crave the distinct and varied beers that a variety of brewpubs offer. Thus, there is not the brewpub culture there that comes from this constant push and pull between brewer and drinker. So I think this is an equilibrium, just as Oregon is in another type of equilibrium. It may change but probably slowly.

-Second, competition: Coors and Budweiser both have huge plants in the Denver area and thus their influence over tastes and their ability to stock local shelves cheaply is an important influence on Colorado Brewers. Pushing too aggressive beers that are expensive to make could quickly tax the local palates and price themselves out of business. Thus New Belgium arises, offering a little tiny step in taste but not too far.

-Third, retail: since Colorado does not allow real beer to be sold in grocery stores, local outlets are mostly independent liquor stores that have, perhaps, more flexibility to stock many different beer labels which might help the proliferation of local bottling breweries.
at 7:50 AM

I'd add a fourth factor: pattern of consumption. I haven't tried to track down these numbers, but Portland drinks more beer in pubs than most cities. And in the pubs, we drink a LOT more craft beer--something like 30%+ of the beer sold on tap in Oregon is craft brewed, and I think that figure is way higher in Portland.

This one always lodges in my brain, too: Portland drinks more craft beer (total, not per capita) than any city in the country. And a lot of that is on tap.