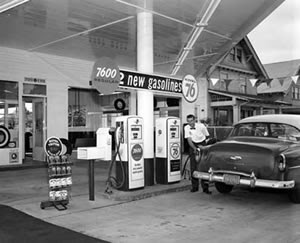 This self-service gas poll has been an interesting exercise and it is instructive for me to learn how opinions are formed and how beliefs are entrenched. I want to reinforce a key point that seems to be getting lost: I have no wish to deny anyone their full-service gas and I am quite happy with a mandate that says gas stations must provide the service upon request. All I am asking is to be allowed the right to decline the service if I wish. What can possibly be wrong with that?

My motivations have also been questioned, so let me be explicit about them. When I reflect I think there are three main motives in my head.

1. The first is purely impatience on my part. I am generally quite a patient person (aided by an extended stay in India in the late 80s - nothing teaches patience like India Rail), but I do get impatient at gas stations. I think this is mostly because it is something I could do myself so easily. Waiting around 2-3 minutes for an attendant to pull the hose out of my car is just plain annoying to me. It is also true that as a kid and a young adult in Oregon, it never used to bother me that much, it is only after years away and then returning has it started to irk. But then my life is much more hectic so I am not sure if it is the experience of how quick an easy self-serve is or the fact that my time is more precious that makes me wish for self-serve.

2. This gets to the second motivation - I don't like having others do for me what I can do myself. I have two good friends, recently married, who live in Sao Paulo, Brazil. He is Brazilian and she from Spain. When they got an apartment together, he wished to employ a housecleaner/cook. He said not only is it normal but it is a responsibility of relatively well-off Brazilians to employ those less well-off. She said having someone in their house working for them made her feel uncomfortable and exploitative. I share her discomfort with having someone do something you can do yourself. I am sure it has a lot to do with my upbringing - we changed the oil and repaired our cars ourselves, we did household repairs ourselves, etc. In fact I can hardly remember anyone ever in our house to fix things. As an economist this does not make sense - it is inefficient. Surely my comparative advantage is not in construction: I am slow, inexperienced and make mistakes. And yet a few years ago, I devoted a good portion of my summer do finishing part of my basement. I no longer fix my car myself (except for routine things like changing the battery) and I have my oil changed but when it comes to pumping gas, I don't think I am any less efficient and since time sitting in my car is basically wasted the real opportunity cost is the total time I spend parked at the station, so making that shorter by pumping myself is efficient.

3. The last reason, and the most important reason, is that I am often an advocate of government intervention in cases where there are externalities, public goods, market concentration, etc. But as an advocate of such interventions, I think it is critical that we are also consistent about areas in which government intervention is not well justified. This is really a big point of this blog. So while it may seem a trivial matter, I don't think it is. We need to be clear and consistent about situations in which government involvement is necessary and we need to carefully justify that intervention. Otherwise, I do believe that the default should be free markets. I believe this not only as an economist in the market sense, but also as a political philosophy. So here is a case of a completely unnecessary government intervention in a market and an infringement on my personal liberty and I think these should be eliminated as much as possible.

Finally, I'll say it once more, if you think that banning self-service is good for jobs, prices, competition, consumer welfare, whatever...then there are much BETTER policy responses to these issues. Banning self-service gas is just not a good way to deal with any of this. If, however, most of you are like Jeff Alworth and admit that you just like it because it makes us different, and that is something valuable to you, then it is quite possible that banning self-service gas makes overall welfare in Oregon higher. I am unconvinced that this is such a state treasure to most Oregonians that they are willing to waste time and money for it, but we'll see what the poll says.

N.B. A commenter has noted correctly that I am using the term "full-service" loosely. I am generally referring to anything that is not self-serve.
at 9:59 AM

Email ThisBlogThis!Share to TwitterShare to FacebookShare to Pinterest
Labels: Self Service Gas

Waiting around 2-3 minutes for an attendant to pull the hose out of my car is just plain annoying to me.

Why not ban stop lights? You probably spend more time waiting for red lights at intersections where there are no cars than you do at gas stations. Plus, stop lights are expensive. Just put in signs and trust in the power of the marketplace to ensure an even and steady flow of traffic.

Seriously, how often are you filling up? Are you always going to the station at peak times? Maybe you should pick a different vendor, or fill up at a different time of day. Even in central Portland, I never spend that much time waiting for a pump or waiting on an attendant. And even if it took a couple of extra minutes three or four times a month, what's that? Less than ten minutes total every few weeks?

Maybe you need to cut down on the caffeine or something.

So true. This is why I refuse to buy gas in NJ.

Thank you for your advocacy. As a recent arrival to Oregon, I found the ban on self-service gas strange, inefficient and increasingly frustrating.

Are there any pending bills in the legislature to do away with this intrusive anachronism?