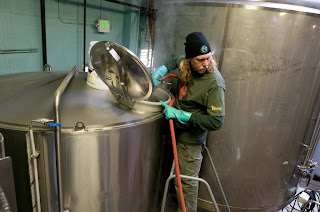 Benjamin Brink/The Oregonian
Just a note to guide you to John Foyston's piece in today's Oregonian on Ninkasi.  Some highlights:

Last year, Ninkasi brewed 18,000 barrels of beer (558,000 gallons) and graduated from microbrewery -- making up to 15,000 barrels a year, as defined by the Brewers Association, a national trade group -- to regional brewery, joining the likes of Rogue Ales, Full Sail, Widmer, BridgePort and Deschutes.

This year, Floyd said, Ninkasi is on track to nearly double last year's total and brew as much as 32,000 barrels -- nearly a million gallons of beer.

That kind of growth can spell trouble, said Paul Gatza of the Colorado-based Brewers Association; he's seen it happen before.

"They really seem to be doing something right," he said, "but plant capacity becomes a real holdback to that kind of growth rate -- it's very unusual for a brewery to be able to sustain a growth of more than about 10,000 barrels a year."

But, thanks to the left-brain/right-brain partnership between Floyd -- the creative, charismatic brewery frontman -- and Ridge -- the financial and planning wizard who spent his college summers interning on the floor of the New York Stock Exchange -- Ninkasi is ready.

Butenschoen said that Floyd also saw a wide-open market in Eugene for a production brewery and that the outcome would've been very different had they started a brewpub.

"If you're a brewpub, you're often seen as competition by other pubs and restaurants, and they're not likely to put your beers on tap."

A few thoughts: First, I was fascinated by Ninkasi's business model from the start. The standard modus operandi of new Oregon craft brewers these days is to start a brewpub. The state makes it easy with a special license from OLCC and the food side helps on the revenue front.  But restaurants are hellishly difficult beasts to do well and concentrating so much on the restaurant can inhibit your ability to get the beer out of the door.  Ninkasi started by doing its own distribution of its kegs to restaurants and bars and thus was able to capture all of the revenue themselves to start (and maybe offer it more cheaply?) - and were able to get an astonishing number of taps quickly (fantastic beer helps a lot too...).  Anyway, it is interesting what they say about the perceived competition of brewpubs versus breweries.

Second, Ninkasi from the start mastered the art of the new social media: Facebook pages, Twitter feeds, etc.  These days, among the youngsters at least, this is a low cost and very effective way to get yourself known.  Ninkasi has been more active on this front than any other brewery I am aware of.

Third, they are apparently ready to start packaging in 12oz six-packs.  For this I say hooray.  Big beers in big bottles are difficult for a wee economist whose wife is not really a beer drinker.
at 8:57 AM