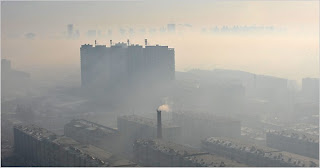 Hei Yubai/European Pressphoto Agency
A two-fer! - unintentionally. Here is Paul Krugman's new piece in The New York Times Magazine in which he both explains the basic economics of market efficiency, externalities, Pigovian taxes and carbon emissions, and then discusses the economics of trying to do something about global climate change as a result of carbon emissions.  Not surprisingly, he is in favor of carbon taxes.  And lest you think that this is a polar liberal opinion piece, economists from the other end of the political spectrum are also in favor of carbon taxes - Greg Mankiw for example.

It is long (and good) read, here are a couple of excerpts that capture the gist of the second part:

What you hear from conservative opponents of a climate-change policy, however, is that any attempt to limit emissions would be economically devastating. The Heritage Foundation, for one, responded to Budget Office estimates on Waxman-Markey with a broadside titled, “C.B.O. Grossly Underestimates Costs of Cap and Trade.” The real effects, the foundation said, would be ruinous for families and job creation.

This reaction — this extreme pessimism about the economy’s ability to live with cap and trade — is very much at odds with typical conservative rhetoric. After all, modern conservatives express a deep, almost mystical confidence in the effectiveness of market incentives — Ronald Reagan liked to talk about the “magic of the marketplace.” They believe that the capitalist system can deal with all kinds of limitations, that technology, say, can easily overcome any constraints on growth posed by limited reserves of oil or other natural resources. And yet now they submit that this same private sector is utterly incapable of coping with a limit on overall emissions, even though such a cap would, from the private sector’s point of view, operate very much like a limited supply of a resource, like land. Why don’t they believe that the dynamism of capitalism will spur it to find ways to make do in a world of reduced carbon emissions? Why do they think the marketplace loses its magic as soon as market incentives are invoked in favor of conservation?

Here he addresses something I have talked about repeatedly to explain why new technology innovation, induced by Pigovian taxes, would be vital if we want to address the big problem emerging economies like China, India and Brazil pose in their profligate use of carbon.

For those who think that taking action is essential, the right question is how to persuade China and other emerging nations to participate in emissions limits. Carrots, or positive inducements, are one answer. Imagine setting up cap-and-trade systems in China and the United States — but allow international trading in permits, so Chinese and American companies can trade emission rights. By setting overall caps at levels designed to ensure that China sells us a substantial number of permits, we would in effect be paying China to cut its emissions. Since the evidence suggests that the cost of cutting emissions would be lower in China than in the United States, this could be a good deal for everyone.

But what if the Chinese (or the Indians or the Brazilians, etc.) do not want to participate in such a system? Then you need sticks as well as carrots. In particular, you need carbon tariffs.

A carbon tariff would be a tax levied on imported goods proportional to the carbon emitted in the manufacture of those goods. Suppose that China refuses to reduce emissions, while the United States adopts policies that set a price of $100 per ton of carbon emissions. If the United States were to impose such a carbon tariff, any shipment to America of Chinese goods whose production involved emitting a ton of carbon would result in a $100 tax over and above any other duties. Such tariffs, if levied by major players — probably the United States and the European Union — would give noncooperating countries a strong incentive to reconsider their positions.

He then goes on to address the issue of uncertainty, echoing the Frank piece from yesterday, but addresses the gradualist versus 'big bang' approaches.
at 9:24 AM