What a nice day on which to turn one year old - and an even nicer day to walk, bike, bus, drive over to the LeftBank Project and help the Upright gang celebrate their first anniversary.  They have some special treats for you if you do: the release of Four Play as well as some apricot farmhouse ale.   I had a chance to sample these (as well as a bit of the Congo Pale Ale) in the media preview night they put on and I was very impressed - more below.  Treats from the Sugar Cube will be served as well, whose proprietor, Kir Jensen modeled for the label (shown here). 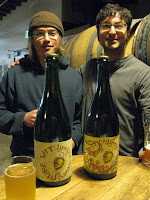 What can you expect?  I'll leave the real reviews to the experts, but I found the apricot farmhouse ale to have a strong apricot flavor yet none of the cloying sweetness that often dooms fruit infused beers.  In fact the apricot ale was wonderfully dry, perhaps thanks to the amazing yeast they use that eats up just about all of the residual sugars.  It does not quite reach the level of Cascade Brewing's trancendent Apricot Ale, but it is not going for transcendency rather it is a noble farmhouse ale and would be a wonderful summer session beer.  I highly recommend it.

The Four Play is the star however: a truly delightful infusion of cherries into the already wonderful Four produces a dry yet complex belgian ale with a subtle cherry flavor that is ever-present but not too assertive.  Again the house yeast is, I imagine, largely responsible for counteracting the sweetness in the fruit.  This is a special beer worth a special trip.  It was dark in the brewery when I tried it but it appeared to have a rose tinted glow to it and I look forward to a glass bathed in sun.

The festivities start at 4:30 and continue on until 9.   The LeftBank Project is at 240 N Broadway at the east end of the Broadway Bridge.