When thinking about product variety in a tractable model, economists often rely on spatial models, the classic being Hotelling's linear boardwalk model. If you think of consumers tastes as being spread out on a line, like a boardwalk where one end might, in the case of beer, be very light pilsner beer and the other be very dark stout ale, then you can conceptualize it in terms of distance from one spot to the next. In other words, suppose my preferred beer is a medium bodied IPA, then if you are only offering light pilsners I would not be willing to pay as much for that beer as I would an IPA. Similarly if I were at a particular spot on a boardwalk, and the only hot dog vendor was a quarter of a mile away, I would not pay as much for that hot dog as I would if the hot dog vendor were only steps away. Having to travel the half mile there and back is costly to me and thus I figure it in when thinking how much a hot dog is worth to me. Now obviously it is a gross simplification to describe beer varieties along only one dimension (light-dark), but that is precisely the point of modeling, stripping away a lot of real world complications (as long as none are fundamental) to come up with a description of reality that is tractable and that can inform us about the real world (think Newtonian physics).

The point is, that in these models, often the equilibrium strategy if you can only offer one variety is the locate in the very middle of the spectrum: this minimizes the distance between you and the mass of customers and allows you to sell more at a higher price. This is why, in my opinion, Pale Ale/IPA is the most common flagship beer among Oregon Breweries and the one beer most often found on the supermarket shelves.

There is also, however, a strong incentive to offer more variety, the closer you are to customers' tastes, the more you can charge them. So it is not surprising for the major Oregon breweries to offer a standard line up of 4-6 beers. This, of course, creates a tension between continuing to increase variety versus selling a lot of the most popular beers. However, it appears from casual observation that the equilibrium is about 5 varieties.

So it does not surprise me when, for example, Terminal Gravity enters the market with an IPA (or at least that's all I can ever find on supermarket shelves). It does surprise me, however, when a whole segment of boardwalk is ignored. It could be that there are not many people sitting on that end so it does not make sense to add a hot dog cart there given the cost and the limited demand. But in Oregon, the part of the boardwalk that is not served is the lager market, and I have a hard time, given the success of Sam Adams, that there is not a strong demand for lagers, even here in Oregon. I, for one, am a huge lager fan and bemoan the fact that I generally have to look to the east coast for tasty lagers. 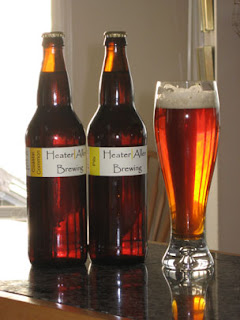 Well finally, we have a new entrant in the Oregon beer market that is making lagers: Heater|Allen of McMinnville. They are not producing much beer yet so I have yet to sample the wares, but I anticipate a strong demand if they do ramp up production as long as the product it good and it appears to be. Let's hope they ramp up soon.
at 10:35 AM