Economist's Notebook: The US Economy

Three things prompted this post. The first was a letter to the editor in today's Oregonian from a Englishman, Clayton Jolly, who recently visted Portland and write the paper to tell everyone how much he liked it. I chuckled to myself thinking "I bet you liked it, everything was pennies to the Pound." The British Pound has been trasding for about two dollars for some time now, making jaunts in Portland seem like tremendous bargains to the Brits. The second was the return of my mother from a quick stay in Spain where she stayed in hostels, ate on the cheap and still managed to burn $1500 in less than a week. The third, and most interesting, thing however was this graph from Paul Krugman: 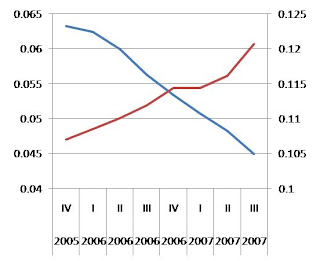 You see, just as US vacations are incredibly cheap right now for Europeans, so are US goods and services. The law of demand tells us to expect increased demand with lower prices and so we see in this graph. What is equally interesting is this surge in demand for US exports has countered the fall in investments in housing that woudl have otherwise, most likely, plunged us into recession already.

And of course, our beer's better, too.