I am going to piggyback on Paul Krugman, whose column today in the NY Times about the drying up of credit and the subprime mess is quite informative and not at all political. Paul argues that the credit crunch is not just a temporary problem caused by panic, but a serious fundamental problem of insolvency. He does a good job explaining it, but the basics are this: banks and other investors have a lot of debt paper collateralized by homes whose values are dropping below the level of debt owned on their mortgages.

Fortunately for Oregonians, we live in a state that has largely been immune to the falling housing market. Not that it matters much it terms of access to credit as it is drying up nationally and internationally. It does matter in that if a lot of foreclosures happen Oregon homeowners could be in for a bit of a rocky time seeing their investment in property (which they may have leveraged for more credit) tank. Some good news for me, the Corvallis market has one of the lowest subprime rates in the country. But is the good news going to last? There are troubling signs that it isn't. Below is a little snippet of data from the latest S&P/Case-Shiller Home Price Indices for Portland, Oregon (the figures are median home values in thousands of dollars). What is so good about this data is that it is not about median home prices from transactions data which we see all the time in the newspaper but are of little use, but about repeat sales of the same properties. So it really gives a very accurate description of home price appreciation. What we see from this data is that the Portland market looks like it is turning south. It is a little too early to tell, you can see a downturn last winter that corrected, but unlike the slow winter months then, the current downturn started in the summer. 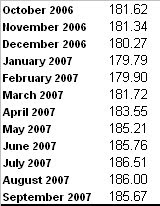 With credit drying up and the potential of a glut of foreclosures on the horizon, I am becoming a little worried about the near future in the Oregon housing market. I am late to the party. When friends asked about the booming housing market a couple of years ago, I was very sanguine because houses are a funny product, generally the supply is very counter cyclical: when house prices are not appreciating or even falling, people tend not to sell, but when they are increasing, people tend to start selling. This is why it is so rare to see house prices go down, Just look at this next picture: 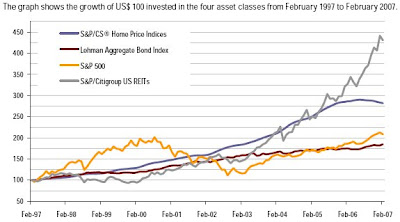 But what I didn't know that the time was how big the subprime business was and how the paper was so poorly scrutinized. Now, a lot of people who banked on 10% annual appreciation are in trouble and I don't think Portland, and Oregon in general, are immune.
at 1:54 PM