Beeronomics: Rogue and the Business of Art 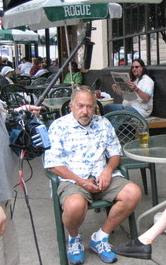 On Friday last, the OSU Economics Club visited with Jack Joyce, owner of Rogue, at the brewery in Newport. Jack was an amazingly gracious host and we all had a wonderful time, and it made me extremely pleased that Rogue was chosen by you, my 3 readers (somehow voting over 60 times) as the best Oregon brewery. Whether this is true or not, it must qualify as the friendliest. Jack certainly fits the bill as a Rogue - he is an independent thinker and businessman and my first thought was that his approach to the beer business was unconventional from an economics standpoint. But the more I thought about it the less I am sure that I am right. Perhaps his approach is the more conventional given his product and that the 'widget' based economic approach to business such as his is just all wrong. In fact, viewing beer as a commodity product is exactly what makes me fear for the long term survival of independent craft breweries in Oregon.

Allow me to explain. When you consider Rogue Brewing next to other major players in the Oregon craft brewing industry, like Widmer, Deschutes, Full Sail and Bridgeport one thing immediately stands out. Whereas the others have clearly been heavily influenced by marketers and have done serious branding, offer a carefully selec

ted range of beer styles, engage in a fair amount of mass media advertisement, etc., Rogue shares none of these characteristics. So one of the main questions I had when we talked to Jack was whether there was a method to the madness of Rogues many product offerings, unconventional packaging and lack of advertising. To be sure the other breweries are using the standard playbook: solidify your brand identity, lead with a popular range of styles, try and grow your markets through advertising - you see it all the time. Let's call it the Boston Beer Company strategy.

What Jack said to us is that he thinks about none of that. His philosophy is that beer is art and, just like art in the 19th century, it needs wealthy sponsors so that it can flourish. He sees his role as that of a wealthy sponsor, not in the sense that he is bankrolling a failing business, but that his job is to find a way to sell enough of the art to keep the artisans in food, clothing and shelter. So he has absolutely no say in what beer gets made, how it gets made or even if it should be made. He gives complete control to John Maier, his brewmaster, and when Joh 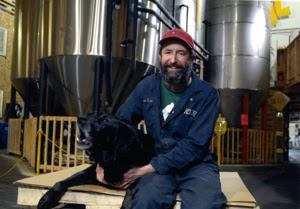 n has come up with a new beer has only one question for him: "is it beautiful?" If the answer is 'yes,' then Rogue puts it out and Jack finds a way to sell it. This has made Rogue arguably the most creative, diverse and interesting of the major craft brewers in the world. They may not have grown nearly as fast as Deschutes or Widmer, but they have seen stable, constant growth and have a following all over the US and the world. (Interesting fact: according to Jack, Rogue is the #1 selling foreign beer in Japan)

So this begs the question, what is the difference between commodity and art markets? Commodity markets assume a fair amount of homogeneity while the lifeblood of art markets is distinct products. The attitude that you are operating in a commodity market is what drives the marketing arm of Boston Brewing (even though they try an stress the distinctiveness of their beer, the fact is they want customers to view it as a better Budweiser, not some entirely different product). If you take the art market attitude then the product itself has an essential value that comes from the careful crafting of a unique beer. The truth is that economically speaking the former attitude is probably the 'right' one in terms of profit maximization. But the latter attitude is not foolish or naive, it is simply another way of viewing the market in which you operate. What I am entirely sure of is that Jack, John and all the rest of the Roguers are maximizing their own utility by creating a successful business based on the art of brewing. And the rest of us get to enjoy the wonderful results.

It is a beautiful thing.

NB: The attitude that they are producing art also carries over to their packaging of which Jack is very proud. He views their bottles as beautiful works of art as well.

NB2: The craft brewing culture of Oregon is starting to create a new generation of young beer drinkers in Oregon. Something my friend Jeff has noted elsewhere. When Jeff and I were in college together, Ranier pounders and suitcases of Hamms were the typical beers of choice. I was surprised that the OSU undergrads that came to Rogue clearly knew much of the entire Rogue line up and were quite enthusiastic Rogue drinkers. (Though these are students who have chosen to be a part of the Economics Club, so they are clearly a sample of the more discerning and sophisticated OSU student)
at 8:47 AM

Email ThisBlogThis!Share to TwitterShare to FacebookShare to Pinterest
Labels: Beeronomics, Economics of Art

It would be interesting for you to go to Widmer, Deschutes, or Full Sail and do a similar tour for comparison. Full Sail, as an employee-owned company, would look a little different, I bet. Deschutes, like Rogue, is owned by a single person, so that might be an interesting comparison. And finally, the business strategy of Widmer would be fascinating. Since they all compete in exactly the same market (and since we've all, at different times, purchased their products), it would be most interesting to hear how they characterize it.

I hope you got a snort or two for your trouble!

I agree with Jeff. You're clearly very biased towards Rogue so it would be especially interesting if you were to tour and compare them all.

I don't think I am biased toward Rogue, this is just a post about a visit there. The point I was trying to make in my post was that Rogue's strategy from an outside persepective did not seem to make a lot of sense. But upon further reflection, I can understand the artistic product-driven approach. Other brewers in Oregon, by contrast, appear to have a strategy that seems very standard from an economist's POV. I don't think this strategy compromises the excellence of the beers - it is just a more standard approach.

I meant no disrespect to other brewers and enjoy all of their beers immensely. In fact, in my poll, I voted for Deschutes because I think they are more consistent across so many different styles - and this makes sense given how Rogue has no qualms about pushing very diverse products.

But, I would love to visit them all, and eventually I hope to do so, and I look forward to learning more.

I have also waxed poetic about John Harris in this blog as well so I think I have been fairly even handed.

In my fridge at the moment, BTW, is some Full Sail Wassail, Deschutes Obsidian and Black Butte, Rogue Dead Guy, and some damn tasty homebrew Jeff was kind enough to share. There is a sixer of TG IPA in my closet as well. Yum.

Okay, okay - point taken! I will cut you some slack:). I have a familial relationship to the Widmer brewery so perhaps I'm the one who is biased.

Whew! I am an academic so the word bias causes me panic. Widmer is actually the most fascinating case to me right now: how to balance the creative beer side, the demands of increasing market share and the needs/wants of AB. As distribution is so key, having ABs distribution is a huge boost.

You are in good company: Jack Joyce claims to drink Bud.

Anyway, anytime the Widmer brothers want to invite me up, I am game!